The only options you had previously to upgrade from an older copy of Windows to a new one was to run the installer either while the installed operating system was running or by booting from an installation disc or Flash drive to initiate it.

Microsoft wants to make things more comfortable and has added an option to upgrade to Windows 10 using Windows Update.

Windows Update is the operating system's updating service which is best known for delivering security patches once a month to supported Windows devices.

The core benefit of upgrading via Windows Update is convenience. You don't need to download the ISO image of Windows 10, don't need to burn it to DVD or copy it to a USB Flash Drive, and don't need to run it afterwards on your system.

Note: Windows 10 is not ready for prime time yet and it is not suggested to upgrade your work system to it. It is ideal if you have a spare system and want to try it out or a full backup that you can restore.

The first thing you need to do is downloaded a small program from Microsoft which prepares your Windows 7 or Windows 8 operating system for the upgrade.

It is a 10 Megabyte file that runs automatically on your computer after you execute it. It requires a restart of the PC so that the changes it made take effect.

The device will boot into the current operating system after restart. 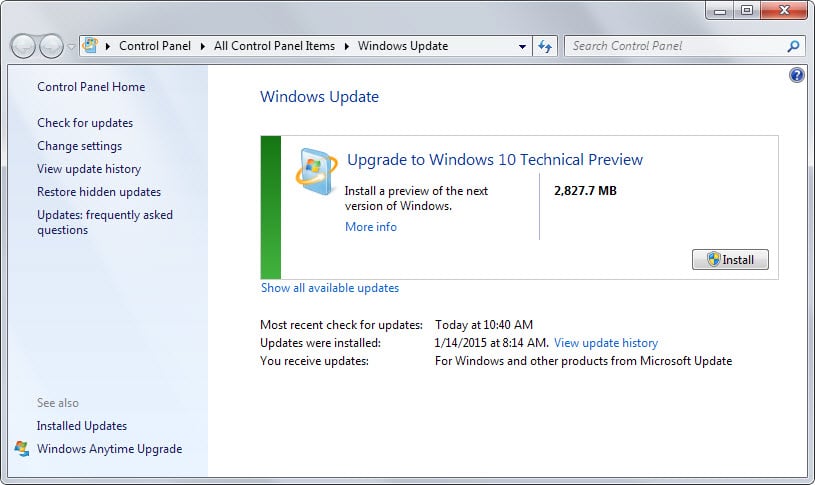 It seems possible to go back to the old operating system after the update. While that is the case, it is highly suggested that you create a backup of your important files and data before you proceed with the update.

There is also no option to change the interface language during the upgrade process.

You can remove the "update to Windows 10 preparation update" again from Windows. You find it in the installed updates list as "Update for Microsoft Windows (KB2990214)".

Windows 10 will be a free upgrade in the first year to all (home) customers who run Windows 7 or Windows 8.1 devices and it is likely that Microsoft will make Windows Update one of the delivery options for the update.

Martin Brinkmann is a journalist from Germany who founded Ghacks Technology News Back in 2005. He is passionate about all things tech and knows the Internet and computers like the back of his hand. You can follow Martin on Facebook or Twitter
View all posts by Martin Brinkmann →
Previous Post: « Latest Windows 10 Preview download available featuring Cortana and new apps
Next Post: Will you make the move to Windows 10? »