Google introduced a new Guest Mode for its Chromecast device in the most recent Android Chromecast app. It allows anyone to cast contents without having to connect to your wireless network to do so. Here is how it works.

That's true for the initial setup, but also for any other device, be it phone, tablet or computer, that you want to use to cast to the device.

When friends, family or colleagues want to use their device to cast using your Chromecast, they needed to run the same setup routine which meant that you had to provide them with your Wlan password.

While that's not always a problem, it can be problematic if you prefer to keep your wireless password a secret. Up until now you had to change it after the third-party was done casting to your device to make sure it was protected and you were the only person with access to it.

Chromecast's Guest Mode provides a solution to this by allowing others to cast to your device without the wireless password. 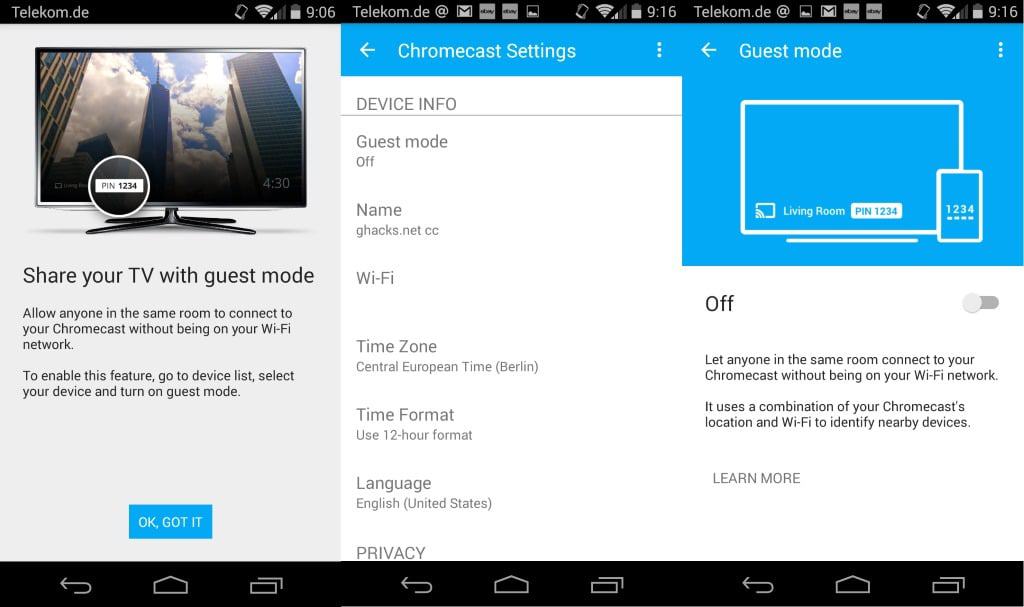 When you start the Chromecast application on your Android device for the first time after the most recent update, you are informed about the Guest Mode on start.

To set it up do the following:

Congratulations, you have set up Guest Mode correctly.

So how does it work?

To use Guest Mode, select the Chromecast device in the list of devices on the device you are using. The Chromecast attempts to establish a connection with the application automatically using the four digit pin.

If that fails for whatever reason, you receive a prompt which you use to enter the four digit pin which is displayed on the Chromecast's Home Screen.

The connection is established then and the contents that you have selected to be casted will be shown on the TV.

The new Guest Mode is useful whenever a guest wants to cast something on a Chromecast device as it protects the wireless password when enabled. Chromecast owners who don't need it leave it off and that is that then.