When Mozilla launched Australis, several readers of this blog moved away from Firefox by installing Pale Moon instead. The Pale Moon browser is Firefox in essence but with several notable differences.

Probably the biggest difference is that the Pale Moon author made the decision to keep Firefox's classic layout and design instead of switching over to the new Australis interface.

Firefox users can modify the browser to make it look similar to the classic version of the pre-Australis era, but that is only possible by installing one or multiple add-ons.

With Pale Moon, nothing needs to be installed as it comes without the new interface. There are a couple of other differences: a dedicated 64-build for Windows for example or features such as tabs on bottom or the add-on bar which Mozilla removed from Firefox in recent releases.

The author of Pale Moon has released the first public beta build of the browser for the Android operating system yesterday. 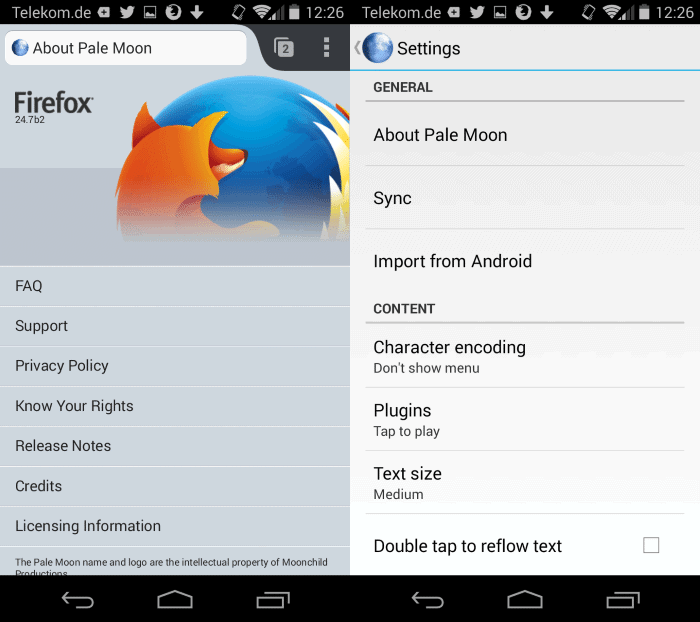 The Pale Moon for Android download is currently only offered on the official website and not on Google Play. Before you can download it, make sure to enable the installation from unknown sources in the settings as it will fail otherwise.

Tap on settings, then security and there you find the option to enable installation from unknown sources.

Once done head over to this forum post and tap on the http download there. Once downloaded, open the downloads and tap on it to run the installation on your Android device. 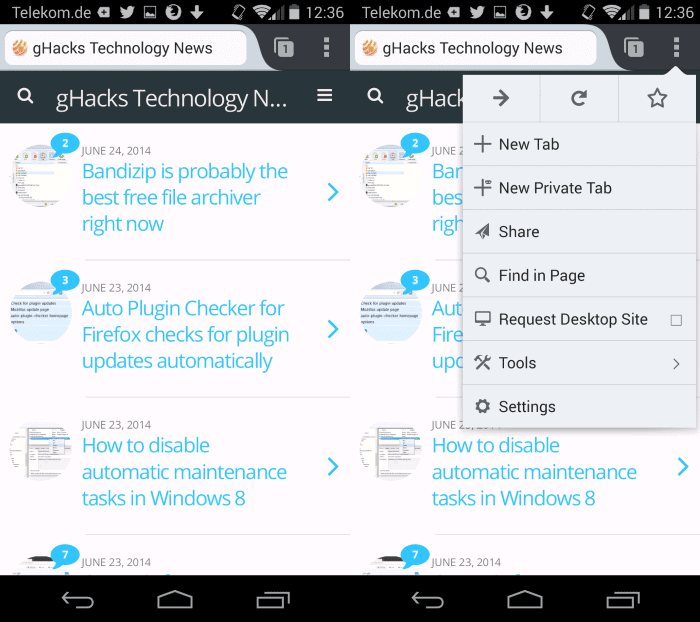 Pale Moon looks and feels like Firefox for Android, but that was to be expected considering that they share much of the source.

The biggest differences are visible when you open the settings. Here you find direct links to information and preferences compared to Firefox for Android which displays menus only when you open the main settings page.

You will find quite a few instances where Firefox is used instead of Pale Moon, and some links lead to Firefox pages instead of Pale Moon ones. That's however one of the purposes of a beta release, to sort out these things before the application gets released as a stable version to all users.

Pale Moon supports Firefox for Android add-ons, but only if you make a change to the browser's configuration:

Once done, it should be possible to install mobile extensions in Pale Moon.

According to the author, synchronization between the desktop version of Pale Moon and the Android version should work.

The release of an Android version of the browser should improve Pale Moon's reach further. Users who work with the desktop client already may like the idea of syncing the data with the Android version. Once it is launched on Google Play, and I assume that this is going to happen, it could attract a larger audience which in turn may be positive for the desktop client as well.

Previous Post: « Should you use eBay's Valet service to sell items?
Next Post: Greenhouse for Chrome reveals a politician's campaign contributions »