Back when Microsoft announced the public release of the Windows 8.1 Preview operating system, a beta test version of the upcoming update for its Windows 8 system, the company made it clear that users who installed the preview as an update on a Windows 8 system would not be able to update the system from the preview to the final RTM version.

What this means is that users who have installed the Windows 8.1 Preview need to install Windows 8 on the PC again before they can install the final Windows 8.1 build on the system. That not only means that they lose access to all of their customizations and apps they have installed in the meantime, but also lots of work.

I was not overly worried about that announcement back then, as Microsoft has claimed the same several times in regards to updates from previous beta or test operating systems to final editions.

Anyway, if you have installed the Windows 8.1 Preview on one of your PCs, you are probably wondering if any progress has been made in this regards, now that the final RTM build has leaked on the Internet. 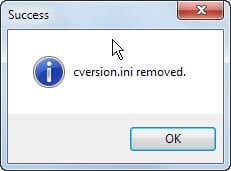 Winsioutilis is a free program collection for Windows that manipulate configuration files on Windows iso disc images to unlocks restrictions that Microsoft has set in place.

One of the tools, cversion.ini Removal Utility, removes the cversion.ini file from the ISO image of the Windows operating system installation disc. This file defines the allowed upgrade paths. If the system does not match the version information, the update will not commence and you cannot do anything about it unless you edit the file manually, or remove it from the ISO image completely.

This is very useful for upgrading from release preview versions of Windows to the final version (e.g., Windows 8.1 Preview to Windows 8.1 RTM) while preserving your data, settings, and programs. This tools works in the same fast, efficient manner as the ei.cfg Removal Utility, so there is no need to unpack and rebuild ISOs, and the process can be trivially reversed.

To use the application, run it after you have downloaded it to your system and unpacked it. You are prompted to select a Windows ISO disc image that you have stored on the computer. Select the Windows 8.1 final ISO image. It should only take a couple of seconds tops for the process to complete.

If it did succeed, you should get a success prompt stating cversion.ini removed. You can then go ahead and burn the iso image to disc, and install Windows 8.1 over your existing Windows 8.1 Preview operating system without running into any issues whatsoever.

The effect is that you will keep your files and programs that you have installed on the system, which you would otherwise lose in the process.

If you have installed the Windows 8.1 Preview on a Windows 8 PC, you may want to use the small tool on a Windows 8.1 upgrade ISO image to upgrade the operating system without losing any of the existing data. (via Deskmodder)

Martin Brinkmann is a journalist from Germany who founded Ghacks Technology News Back in 2005. He is passionate about all things tech and knows the Internet and computers like the back of his hand. You can follow Martin on Facebook or Twitter
View all posts by Martin Brinkmann →
Previous Post: « Surprise: Windows 8's usage share jumped in August 2013
Next Post: Swiftsearch is one of the fastest non-indexing search programs for Windows »