Software to run when your antivirus solution fails

Running up to date antivirus software on your system is one of the best protections against threats that you encounter locally or on the Internet. While it is highly recommended, it does not offer 100% protection regardless of which programs you are using to protect your computer and its data.

New threats appear on a daily basis and your computer may be vulnerable to them until your antivirus software gets updated to detect and remove these new threats. While heuristics may detect unknown threats, it does not have a 100% detection rate either.

What this means is that your computer may get infected by malware even if you are running antivirus software on it.

If you suspect that something is not right, or know that you are infected but cannot get rid of the infection, you may need to run specialized tools that help you in this regard.

The following lists links to programs that you can run in this case.

These scanners run beside your resident security setup. You basically download the products, run them once on your system to see if they find anything, have them remove malware they find, and remove them again from your system or keep them on it for future use.

Malwarebytes Anti-Malware Free - The program gets lots of recommendations here on the site and elsewhere, and deservedly so. You do not really need to configure anything before you run it. Just make sure you select full system scan to scan all files and processes of the PC. Dr. Web CureIt - Another on demand scanner that you do not need to install at all. Just run it after you have downloaded it to give your system a thorough scan. Note that you need to accept the sending of anonymous statistics in the free version. On-demand scanners are your first line of defense against unknown threats that may have slipped past your resident security setup, but they may come up short sometimes too. That's when you bring out specialized tools.

ComboFix - The program scans your computer for malware traces and attempts to clean infections when found automatically. Make sure you close all open program windows before you run the program. The program attempts to create a system restore point before it starts the scan, and will disconnect the computer from the Internet during it.

A log file is generated in the end that you can use to analyze potential threats. Several help forums exist that you can visit to ask questions about certain findings in the report.

RKill - The program has been designed to unload malware processes that run on the Windows system. It will only do that and not run any disinfection or removal operation. The idea behind it is to remove processes so that your resident antivirus solution can remove them from the system. 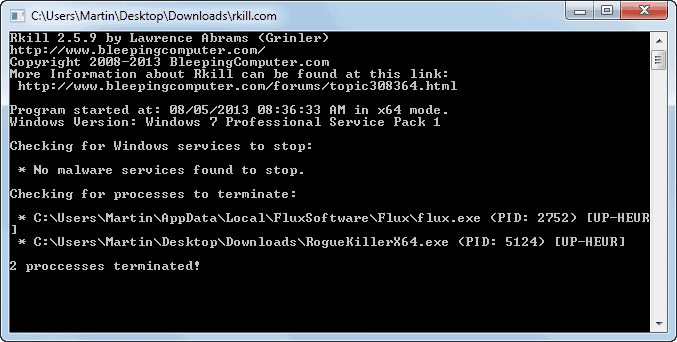 RogueKiller - This versatile program can detect and remove malicious processes from your system. It handles so-called ransomware but also other threats such as DNS hijackers, Hosts file manipulations, some types of rootkits and other types of infections. Kaspersky TDSSKiller -This anti-rootkit scanner detects known rootkits that may have been installed on your system. It is regularly updated to detect and remove new threats. Just click on the start scan button after you have downloaded and started it to scan your system for threats. HiJack This - The program scans critical system locations for traces of malware and displays a report in the end that you need to analyze.

McAfee RootkitRemover - Another standalone program to scan and remove rootkits on a PC.

Panda Anti-Rootkit - Scans for and cleans rootkits running on a system.

RootkitRevealer - Advanced tool by SysInternals / Microsoft to detect rootkits on a Windows system.

Have a favorite program that is not on this list? Feel free to leave a comment below to share it with everyone else. The following products have been mentioned in the comments.

Previous Post: « How to modify your browser's fingerprint so that it is no longer unique
Next Post: SecureAPlus: application whitelisting for additional security »