There are not many reliable sources for operating system market share trends. Microsoft for instance does not reveal those information even though it could, and usage trend sites like W3schools or Net Market Share do not have the reach to paint a clear picture. This becomes obvious when you compare trends with each other.

Lets take Microsoft's Windows 8 operating system as an example. Netmarketshare sees Microsoft's newest operating system at 2.67% of all systems in February 2012 which is barely in front of Apple's newest system Mac OS X 10.8.  But when you look at W3Schools, you will notice that the site sees Windows 8's usage share by 4.8% which is nearly double of the Netmarketshare value, and that's missing a whole month of data.

Many gamers are usually on the forefront when it comes to technology, and the main reason for that is that games are more demanding than the majority of other applications one can run on the system. The February 2013 Steam survey should still come as a surprise to many who have predicted that Microsoft's Windows 8 operating system will fail big time. In it, the operating system snagged away Windows XP"s third place in combined operating system share.

According to Valve's survey, Windows 8 systems account for 9.63% of all user PCs that took part in the survey. It is up that month by 0.87% and trailing Windows 7 which is the dominating system on Steam with more than 68%. As far as Windows XP goes, it is having a combined share of 9.33% and lost 0.72% since the last survey took place. 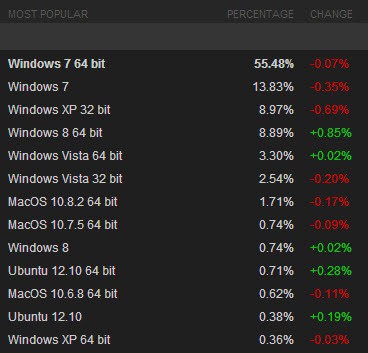 It needs to be noted that Steam surveys are optional which means that the statistics are generated from part of the userbase and not all of it. Still, the Windows 8 share is high, probably the highest right now on the Internet. There are explanations for that though. Gamers are more inclined to purchase new hardware due to the taxing nature of computer games. It is reasonable to assume that a larger portion of gamers buys new PCs more frequently than home users who do not play the latest computer games.

So how does this compare to Windows 7's performance at the same time? According to Arstechnica, Windows 7 had a combined market share of 28.53% five months after its release.

If you are wondering about other stats. Intel is beating AMD with 72.39% to 26.71% in PC processor usage by manufacturer, and NVIDIA is beating ATI with 52.39% to 33.92% in PC graphics card usage. You can check out the latest Steam survey here. Note that you need Flash Player for some of the statistics and information.

Have another explanation for Windows 8's high usage on Steam?