If you are using the beta version of Firefox on your Android smartphone or tablet then today it took another step towards becoming more like the desktop experience. Shannon Prior, of the Mozilla Foundation, announced the latest version of the web browser now comes with Private Browsing, which has long been a part of the computer-based counterpart.

Private Browsing in perhaps the biggest part of this update, but not the only one. The Monday announcement also detailed several more updates that users will likely find interesting.

First the big news though. Prior introduced "Firefox for Android Beta comes with new per tab private browsing, allowing you to switch between private and standard tabs within the same browsing session". While this mode has been called by other, less-savory, names it has many legitimate uses. For instance, you may want to shop for your spouse's birthday present without her accidentally stumbling across the evidence. Of course, you can erase history, but Private Browsing has your back in case you forget.

Second, Mozilla has a new and updated version of the Home screen. The latest Firefox beta allows users to customize the shortcuts. Users can completely change the images on the home screen to their favorite or most frequently visited sites. To do this, simply tap and hold a site to pin it to the Home page. 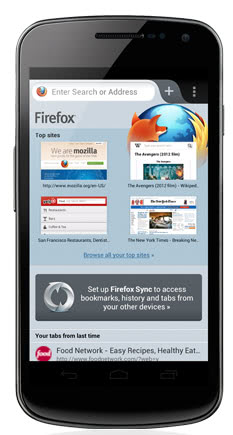 Finally, Mozilla announced improved support for the ARMv6 platform. That may not sound exciting, but it opens up Firefox to approximately 25 million more devices. It does so by lowering the minimum requirements for running the mobile browser.

While I tend to use Chrome on the computer, I use Firefox on my Galaxy Nexus. In the past I have used the RTM version, but today's announcement has convinced me to move on to the beta version, mostly due to the new Home screen options.