Install Malwarebytes Anti-Malware on PCs where it is blocked - gHacks Tech News
ghacks.net

Install Malwarebytes Anti-Malware on PCs where it is blocked

While most malware ignores software installed on a PC it is trying to infect, some have been designed to block security software from running or being installed on a system it has successfully infected. Malware designed this way tries to make it harder for admins and users to disinfect the system or even detect that malware is running on it. Various techniques are used to achieve that goal, from redirecting security software websites to other sites so that antivirus solutions can't be downloaded that easily to monitoring running processes to automatically kill processes created by security software.

Malwarebytes, the makers of the popular Anti-Malware application for Windows have created a program they call Chameleon for these situations that can install the security software in cases where the program is blocked from being installed or run on the system.

Start the Windows Help file once you have downloaded and unpacked Chameleon on an infected system. You may notice many common file names such as firefox.exe, iexplore.exe or rundll32.exe in the folder which all have the same size. All these files are disguised Malwarebytes Anti-Malware instances that you can try to run using the help file. 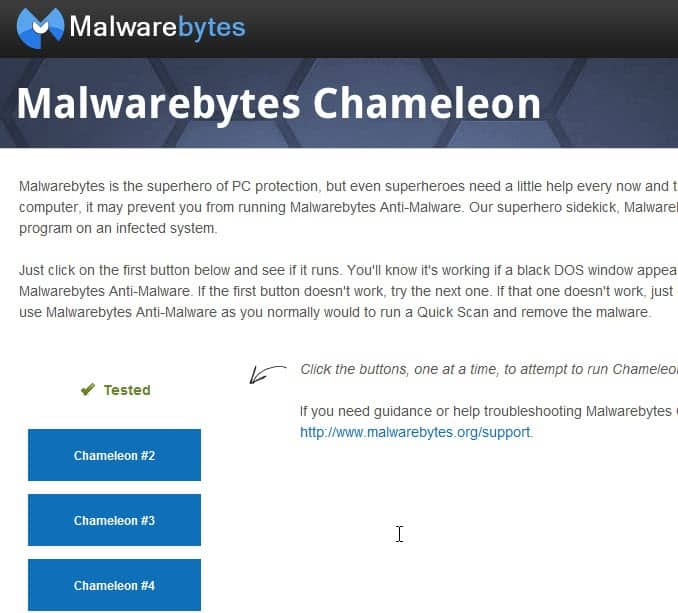 When you open the help file you will notice the Chameleon buttons which you should try one after the other until you notice a black DOS window appearing after an UAC prompt. If it does it means that Chameleon successfully launched. You need to press a key in that window to start the installation of Anti-Malware on the system. 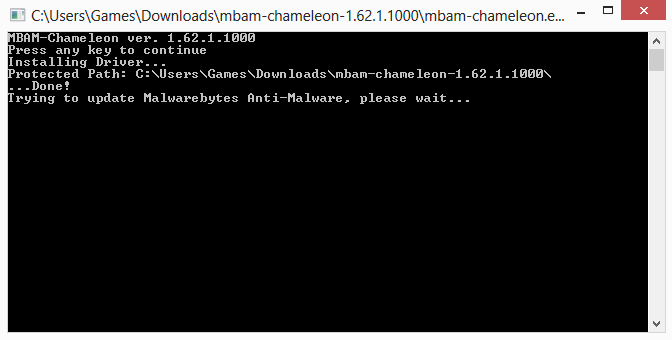 You are then taken through the normal installation procedure of the program after which you can run a system scan to detect and remove malware running on the PC at that time.

Just click on the first button below and see if it runs. You'll know it's working if a black DOS window appears, slays malicious programs, and then starts Malwarebytes Anti-Malware. If the first button doesn't work, try the next one. If that one doesn't work, just keep trying until you find one that does! Then use Malwarebytes Anti-Malware as you normally would to run a Quick Scan and remove the malware.

If you are in a situation where malware is blocking the installation of antivirus software, you may want to give Chameleon a try to sneak past the defenses to get a security solution installed on the system. While it may not work in all cases, it is definitely worth a try as it will install one of the best cleaners on the system if it succeeds.
Advertisement

Previous Post: « Get forecasts and alerts on your desktop with Weather Watcher Live
Next Post: Add separators to the Windows taskbar »