Norwegian company Opera Software has been working for quite some time on the next version of the Opera web browser, Opera 12.10 which is currently available as a development release. The latest stable release of Opera, Opera 12.02, dates back to August of this year, which feels like eons in times where Mozilla and Google push out new browser versions on a monthly basis.

The Opera Desktop Team has released several snapshot versions of Opera 12.10, and Opera 12.50, in that time which sometimes introduced new features like improvements to the browser's extension engine, increased security when installing extensions or support for Microsoft's operating system Windows 8.

A new snapshot of Opera 12.10 has been released today by Opera Software introducing a new feature that aims to speed up the web browsing. The snapshot release basically prefetches DNS whenever you hover over a link in the Opera web browser. The idea here is that it is very likely that you are going to click on the link since you are hovering over it. While there are other explanations for this, like verifying the web address the link is pointing to, it is likely that the majority of hovers over links result in clicks on the link. 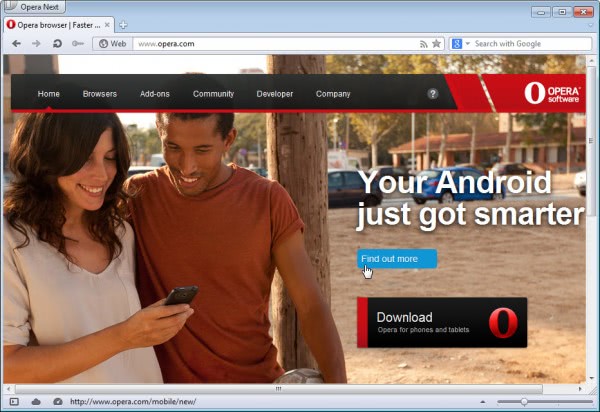 Only the domain name look-up will be prefetched, while the document or resource the link is pointing to won't. Opera users basically save the time it takes to look-up the domain as this has already been done when the link was hovered. The company notes that DNS will only be resolved for http links and that the browser won't run more than five look-ups per second.

The latest snapshot furthermore includes several bug fixes, some of which specific to certain operating systems. Please note that there is no 64-bit Mac version available for this release. You only find 32-bit versions for Windows, Mac and Linux, and the 64-bit version for Windows on the desktop team blog.