I have been using Smush.it for some time now here on Ghacks to make sure that images are as small in size as they can possible be before they are published. It is a WordPress plugin that works automatically once you have installed it. It basically redirects images that you upload to the Smush.it server where they are processed before placed in the WordPress media directory on the server.

This worked well most of the time. Sometimes, the compression server would not respond at all and images as a consequence were not uploaded properly in that time. Disabling the plugin until the issue got resolved was often the cure for the issue.

Besides that, I have identified two issues in Smush.it. The first is that while it is doing a good job at reducing the size of images that are uploaded to the site, it does not do so in an optimal fashion. Programs like PNG Gauntlet or File Optimizer reduce the size of images processed by Smush.it by a further 10% on average. 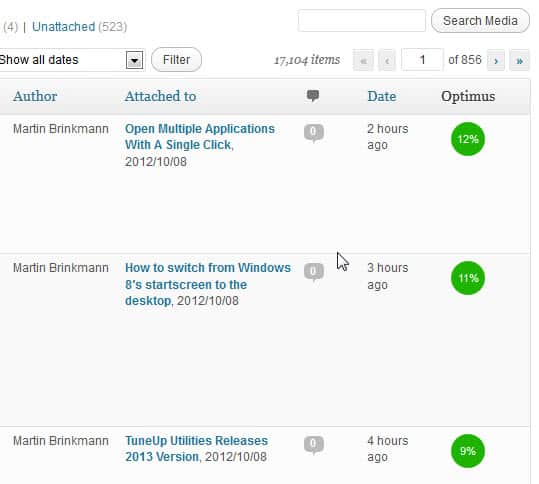 The WordPress plugin Optimus has been making the rounds ever since it has been uploaded to the WordPress plugin directory. It works on first glance similar to what Smush.it does: Images get processed on a remote server before they are added to WordPress' media library. What distinguishes it from aforementioned plugin is that all versions of the image get optimized by Optimus, not only the original image.

Images are processed in the background, usually not recognizable by the uploader. It remains to be seen how the optimization server will handle that when thousands of blogs use the plugin, for now, it works just fine and without noticeable delays.

Optimus works best with jpeg images which is probably the biggest issue. The author suggests to upload only jpeg images to WordPress to benefit from the compression, but this may not be possible all the time. If you are usually uploading jpg images, you are golden though and should give it a try. The core reason for reducing image sizes is to improve page loading times for visitors of the blog. A side effect is that search engines like Google use the page loading time as one of the ranking signals of the algorithm.

Update: Please note that the free version of Optimus is severely limited now. It is only available in Germany, Austria and Switzerland and restricted to JPEG files with a maximum file size of 25 Kilobytes which means it is not usable on the majority of blogs. The paid version sets you back  €14.99 per year, has no country lock, includes support for PNG files of up to 100 Kilobyte in size, and raises the size limit of JPEG files to 1 Megabyte.