While it is still possible to largely ignore social networking sites as a webmaster, it is already becoming apparent that webmasters without a social marketing strategy will eventually fall behind webmasters who use these new sources of traffic and engagement. What more, it is likely that Google will continue to push its Google+ service, and one of the fallouts from this will be a deeper integration into the company's ranking algorithm.

Sometimes though you simply may not have the time to post manually to the important social networking sites, and that's when automated posting solutions may come into play.

Hootsuite for the most part if a commercial service that allows webmasters to monitor social networking traffic. One of its features is the option to automate postings on social networking sites such as Google+, Twitter or Facebook, and that's what this guide is about.

First thing that you need to do is create an account over at Hootsuite and add at least one social networking account to it. The service supports the following sites:

Once you have added at least one social networking account, you see each account listed in its own tab in the Hootsuite web interface. Locate the publisher link on the left sidebar and select RSS Feeds from the available options there. 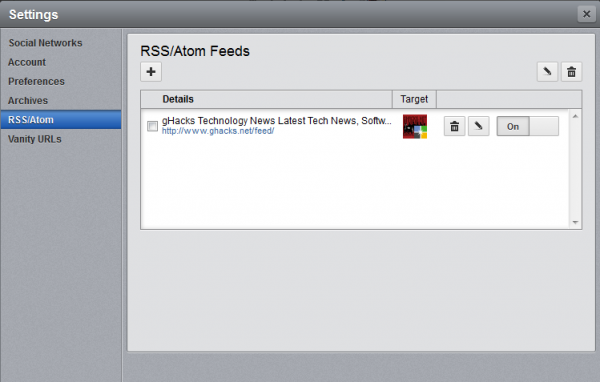 The majority of features that the site offers, scheduled posting and statistics, are not available for free users of the service.

Hootsuite is excellent if you are looking for a free service that allows you to post RSS Feeds automatically to popular social networking sites.