Add-ons keeping you on Firefox 3.6? Try these alternatives

Depending on which statistics you look at, about 2.5% of all Firefox users are still working with version 3.6 of the browser.  That's millions of users who are currently working with a version of the web browser that is no longer maintained or supported with security updates.

Mozilla recently ended support for the browser and tried to get Firefox 3.6 users to update through the browser's automatic update feature. The organization furthermore published blog posts and information on its core websites to inform users about the the unsupported version, and recommended there as well to upgrade to the latest version of Firefox. 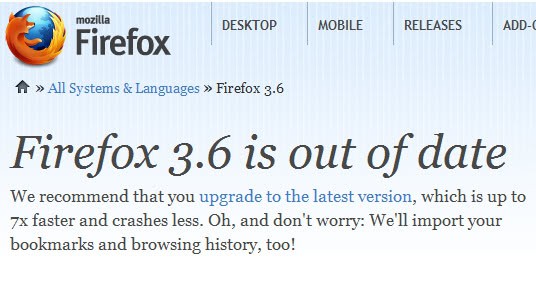 But what is keeping Firefox users from updating their version of the browser to a newer one? Mozilla thinks that add-ons are one of the core reasons. The browser made a jump between version 3 and 4 that rendered several add-ons working under Firefox 3 incompatible with Firefox 4. And while many authors of add-ons managed to make the necessary changes to their extensions to make them compatible with newer versions of Firefox as well, some abandoned their programs instead.

Mozilla's own Jorge Villalobos has published a post on the official Add-ons Blog that is listing popular extensions for Firefox 3.6 and their alternatives that are compatible with newer versions of the browser. When you go through the list you will find several high profile add-ons listed there that have been popular in the days, and appear to he still popular with the Firefox 3.6 crowd. Among the add-ons are Snap Links, Gmail Notifier, Cache Viewer, Customize Google, Fox Splitter or Easy DragToGo.

As far as the alternatives go; For most, at least one alternative is listed there. Some features however have either been implemented natively into the browser so that some of the extensions are no longer needed. And some, due to the changes in Firefox, can't be ported to a newer version of the browser.

While I'm pretty certain that add-ons are one of the things that are keeping Firefox 3.6 users from switching to a newer version of Firefox, it is for many not the only reason to stick with that version of the browser. Many dislike the interface changes that Mozilla implemented in Firefox 4 and later versions, other's feel that newer versions of the browser use more resources and are not as responsive as the browser used to be. This is at least partly attributed to new features like Sync or Panorama that Mozilla added to the browser natively.

I know that there are a few Firefox 3.6 users here on Ghacks. What's your motivation to stay with the browser and block updates to the latest version of Firefox?

Martin Brinkmann is a journalist from Germany who founded Ghacks Technology News Back in 2005. He is passionate about all things tech and knows the Internet and computers like the back of his hand. You can follow Martin on Facebook or Twitter
View all posts by Martin Brinkmann →
Previous Post: « This is the best smooth scrolling extension for Firefox
Next Post: Display more Add-ons in the Firefox Addon Manager »