One of the things that I have come to dislike in recent versions of the Firefox web browser is the redesigned addon manager that Mozilla implemented some time ago. The core reason for the disliking is how the information are presented on the screen. This may not be a issue if you have a handful of add-ons installed in Firefox, but if you are working with dozens, you will notice that the screen estate, even on large computer monitors, is not sufficient to display them all at once on the screen. This basically means that you need to scroll in the addon manager which in turn reduces the overview and manageability significantly.

I have reviewed two extensions for the web browser in the past that deal with addon manager issues. The first, Firefox 4 Slim Add-on Manager has been discontinued some time after it was published by its author. The second, Classicish Add-on Manager does not change the line height of items in the addon manager, but moves the manager into its own window the way it was before Mozilla made the changes.

Cleanest Addon Manager fills the gap that was left by the Slim Add-on Manager extension for the browser. It basically displays all add-ons in a single row, instead of the two row design of the standard addon manager. 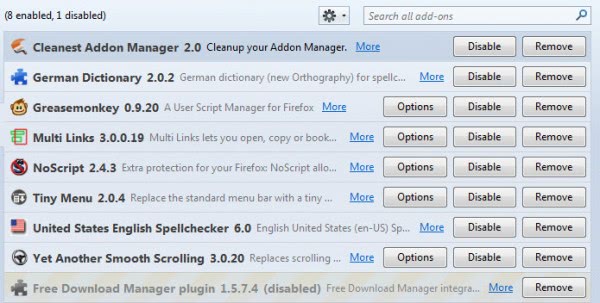 As you can see, everything is lined up in a single row, with all functionalities still in place and directly accessible.

I'd estimate that you can display 30 or more extensions without scrolling in the addon manager with the help of the extension. Keep in mind though that this depends solely on your monitor's display resolution.

Cleanest Addon Manager is a useful extension for Firefox users who have that many addons installed in the browser that they need to scroll to access them all.