Reset Firefox Has Landed, And It's Awesome

Troubleshooting issues that you experience in the Firefox web browser can be an exhausting experience, especially if you can't pinpoint the issue that you are experiencing to a setting, add-on or particular version of the browser. If Firefox has become slower over time, a lot of things can be responsible, and finding out which can sometimes feel like mission impossible.

Instead of having to spend hours troubleshooting and fixing the problem, Firefox users will soon be able to make use of the new Reset Firefox feature. While it is not solution that fixes all issues that users may experience, it is one that will fix a good chunk of issues that Firefox users may encounter.

You may know that Firefox makes use of profiles to distinguish between accounts and different users. These profiles store user related information including bookmarks, the web browsing history, passwords or extensions.

A reset creates a new Firefox profile on the system, and copies part of the information over from the old profile to the new one. Reset Firefox as it stands now is migrating the following data to the new profile:

You may notice that essential items are not migrated here, including extensions and themes, the open tabs, and most of the configuration customizations made.

The core reason for this is that these may be the reason why the issue is experienced in first place. This can be a issue for Firefox users who do not want to lose their open tabs, extensions, or custom configuration settings, as it would mean lots of work to rebuild those in the new profile.

While there are workarounds in the form of backups or Firefox Sync available, it is nothing that Reset Firefox will handle. I personally would recommend to backup the affected Firefox profile first with all of its data, before trying the new reset option.

Depending on the program that you are using, you can restore individual items, for instance extensions, to the new Firefox profile so that you do not have to install the extensions manually after the reset has been completed.

Firefox users who try to resolve issues with the browser by reinstalling it will see the biggest benefits, as reinstallations previously did not change the user profile folder at all, which often meant that the issues persisted after the new installation.

It also needs to be noted that the reset option is only available for the default Firefox profile. You won't see it listed if you are running another profile.

The Reset Firefox feature has launched, and is available in beta, aurora and nightly versions of the browser. Both the aurora and nightly channels are currently plagued by bugs, and Mozilla recommends for now to only test it in the beta version of Firefox.

To access it, Firefox users would enter about:support into the address bar. The Reset Firefox to its default state button should appear in the upper right corner of the screen. 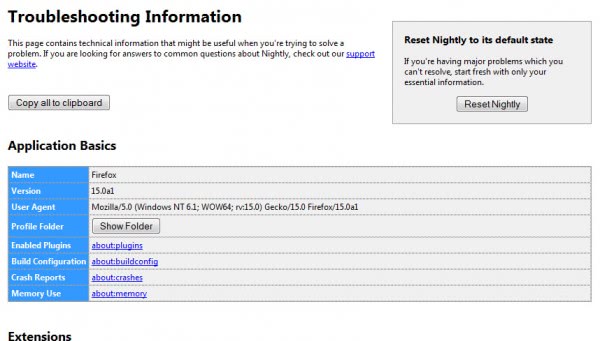 Here is a short introductory video that explains the concept of the feature.

Reset Firefox is an awesome new feature, even though it is limited in the data that it migrates to the new profile. This can be a issue for inexperienced users who may wonder where all their extensions, or their new Firefox theme are after the reset. Experienced users can make use of Firefox Sync or backup solutions to get the data back, even though it may mean that they have to reset again, if part of that data was causing the issue they experienced. (via Sumo and Ken)