I personally like the minimalistic approach over at Reddit as I prefer minimalistic over sites that bombard you with visual eye candy. Some users on the other hand might like a more visual interface, and that's exactly what Scrolldit offers. It basically takes Reddit posts in realtime to display to display the media of all media related posts directly on its frontpage.

Posts without images or videos are shown with their textual contents, the rest with the first video or image, and title only. The posts are updated in near realtime, with new posts added to the top of the page and older posts pushed down. 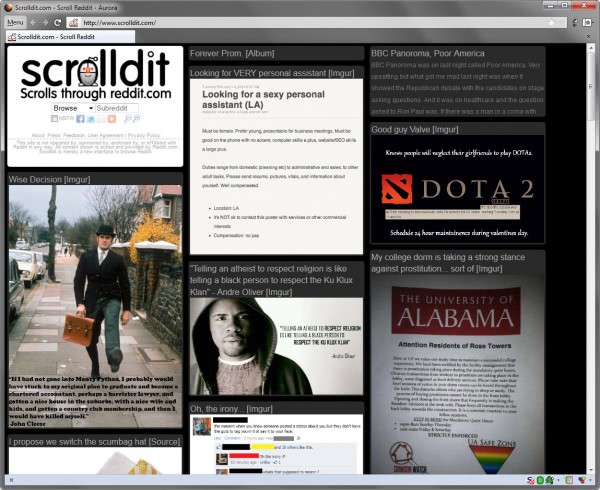 Images, included animated images, can be viewed directly on the Scrolldit website. The same is true for videos that you can also play directly there. Animated gifs play right away, which can quickly become a nuisance, especially on pages with multiple animated images and pages where the animated gif is shown for an extended amount of time.

Scrolldit won't display any not safe for work contents by default, but the checkbox is right there for you to click on to enable those contents as well.

The default page lists all popular posts that made it on Reddit's frontpage. A small navigator in the upper left corner offers to display contents of a single subreddit instead. Once you have selected a subreddit, you will notice that you can now select the hot, new, controversial and top listings for it.

The by far biggest accomplishment of the service is the visualization of Reddit contents. That's great for subrddits where images and videos are posted most of the time, and not so great for subreddits that mostly consist of textual messages.

Users currently logged in on Reddit can vote right on the Scrolldit website by moving the mouse cursor over the item to display the up and down vote arrows.

Some Reddit users may like the visual frontend. Others may dislike it for a number of reasons. From the missing comment count to the inability to block animated gifs from playing right away.

Have you played around with Scrolldit? If so, what's your take on it?