I love to play all sorts of tower defense games. From classic flash based versions to new interpretations like Orcs Must Die which I recently bought on Steam. Today's game is a flash based browser tower defense game. Zombies and other creatures pour into the level and try to reach the exit. It is the player's task to prevent this by building towers in the level that attack and block the entering enemies from reaching the exit as players lose a life whenever that happens.

The player has only a few towers to select from in the first levels of the game. This changes later when updates become available. Zombies enter in at least one but often multiple entrances and leave the map through one or multiple exits which are usually indicated with arrows. There is also some debris in the levels which act as natural borders that zombies cannot pass.

It pays off to look at the layout of the map before placing towers. It is often possible to block parts of the map with cheap towers to direct all zombies through a narrow opening for maximum effectiveness. 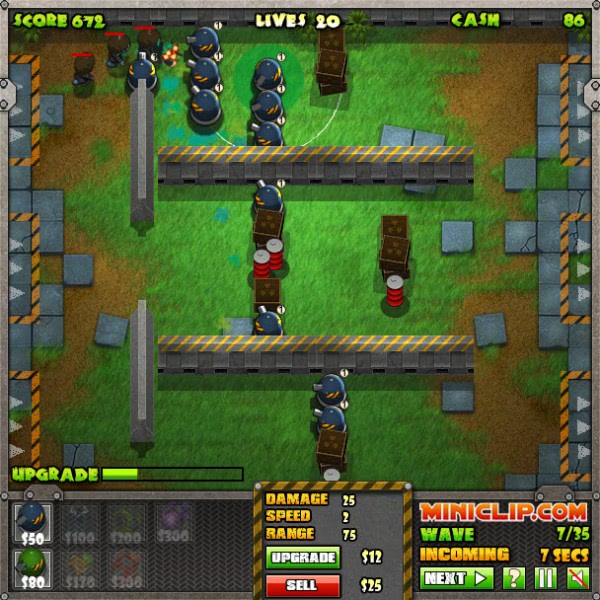 Towers can be upgraded if the necessary upgrade has been selected by the player. Available for selection are new towers, additional money or global tower upgrades. All towers benefit from the latter.

It is up to the player and play style to decide which upgrades to select. It is not possible to go back to select different upgrades at a later time though which makes it important to make the right selections.

Defeating zombies earns money which can be invested in new tower placements or tower upgrades. The game has a total of 15 different maps that unlock gradually and become increasingly difficulty to master. Enemies become stronger, map layouts more difficulty and wrong tower placement often result in a loss. Players loose one life if a zombie reaches the exit, if 20 zombies reach it is game over. Game over only means that the map was not won and needs to be restarted to progress to the next map.

The game becomes repetitive halfway through, which can be mainly attributed to the lack of "interesting" new zombies and the lack of a story. Another element that is missing is a fast forward button to speed up the gameplay.

Still, the game is fun to play especially for users who like the tower defense genre. You can play it over at Free Web Arcade. (via)