Google+ is probably the most hyped service on the Internet these days. This stems from the fact that many of the early adopters are first movers that run their own blogs, websites or are very vocal on social networking sites. It still remains to the be seen how the general public will perceive Google's social networking service. Will it be to complicated to use, with circles and all? We will see in the future.

It is self evident that extension developers are developing and pushing out extensions for the new service in rapid pace. One of those extensions is Replies and more for Google+ for the Google Chrome browser. It is not an official Google extension, but adds much needed features to Google+.

The extension title hints at one of the features: Easier replies to comment or message authors. A reply to author link is added next to the share, comment and +1 links at the bottom of an author's post. All comments show a reply option as well on mouse over. 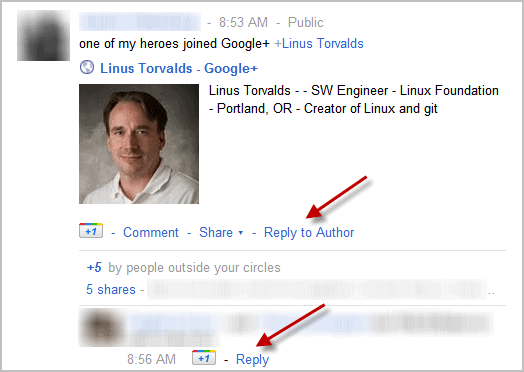 This basically adds the author or comment writer directly to the message field. This saves time and reduces the chance of errors.

Improving Google+ replies is just one of the features of the Chrome extension. It highjacks the favicon of the site to display the unread message count directly in the browser, handy if you keep Google+ open but not active all the time.

The final feature is that the Google+ headerbar scrolls now with the page. That's handy considering that the Share form is located there as well as the new messages count.

Chrome users can install the Replies and more for Google+ extension directly from the Chrome web store.

Martin Brinkmann is a journalist from Germany who founded Ghacks Technology News Back in 2005. He is passionate about all things tech and knows the Internet and computers like the back of his hand. You can follow Martin on Facebook or Twitter
View all posts by Martin Brinkmann →
Previous Post: « Surplus For Chrome Lets You Use Google+ From Anywhere
Next Post: Chrome Web Apps Suggestions Based On Chrome History »