Facebook's presentation yesterday could not put a serious dent into the Google+ hype machine. But not everything is golden and first restrictions and unpleasant surprises have come to light as well. Google's putting the focus in private websites at the moment, which some businesses, like the German mag GPlusOne had to experience first hand. Google banned the magazine's account citing Google+ community standards which explicitly state:

To help fight spam and prevent fake profiles, use the name your friends, family, or co-workers usually call you. For example, if your full legal name is Charles Jones Jr. but you normally use Chuck Jones or Junior Jones, either of these would be acceptable

Businesses and organizations are not mentioned at all in the standards. This is by design, according to a recent video message posted by a Google+ product manager. He states that Google+ is currently focused on the consumer experience and has a team working on Google+ for businesses. The options to add profiles for entities will likely be available later this year, including Analytics integration and linking to other parts of Google the businesses uses.

Google asks entities to hold off on using consumer profiles to build a business website on Google+. Businesses who already have created a Google+ profile, and maybe even have promoted it, may get their profile banned just like the German online magazine experienced.

Google will be running a test with a limited number of businesses, organizations and entities. A participation form has been uploaded to Google Docs that companies can fill out for a chance to take part in the test run. 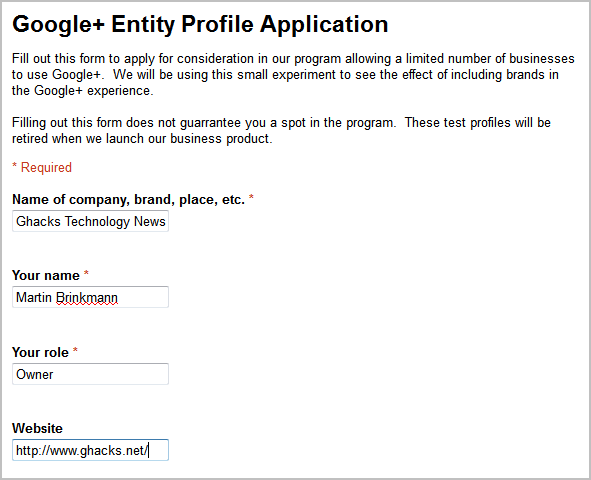 The form can be filled out quickly with information about the businesses name, website, private Google+ profiles and expectations. It should not take longer than a few minutes. Filling out the form does not guarantee you a spot in the test phase though, and businesses should keep that in mind.

Martin Brinkmann is a journalist from Germany who founded Ghacks Technology News Back in 2005. He is passionate about all things tech and knows the Internet and computers like the back of his hand. You can follow Martin on Facebook or Twitter
View all posts by Martin Brinkmann →
Previous Post: « All Your Private Profiles Are Belong To Us
Next Post: Google Bans Belgian Newspapers »