Last month Mozilla published a list of slow performing add-ons for the Firefox web browser. The findings back then were that add-ons increases the startup time of the web browser by ten percent on average. That's a lot, considering that five add-ons would on average increase the browser's start-up time by 50%.

The basic idea was to inform users and developers alike about the top add-ons that slow down the start-up of the
Firefox web browser. Slow Performance data has been added to the Mozilla Firefox Add-on Gallery.

The biggest offenders back then slowed down the browser by 74%. A Firefox user who'd install the top 5 add-ons of the list would slow down the start of Firefox by almost 300%. 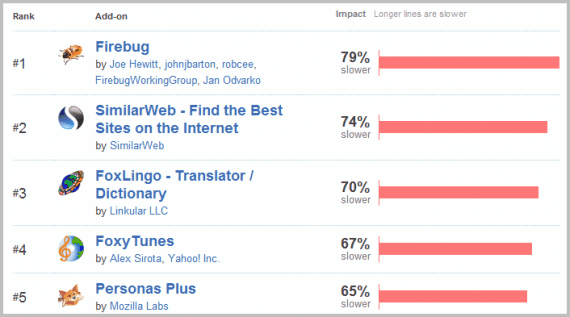 Mozilla has modified the top listing slightly. Only a top 9 list is displayed on the Slow Performing Add-ons page on Mozilla. Back then it was possible to load a top 50 list, which does not appear to be possible anymore.

Operating system filters have been added to the page which have not been there before, making it now possible to display the slowest add-ons for Fedora, Mac OS X, Windows 7 or Windows XP instead of a mixed listing. 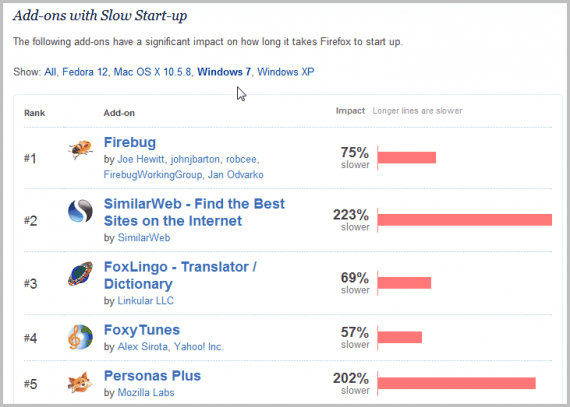 If you look at those listings you will notice that only the add-ons of the top 9 listing are displayed. The start-up performance on the other hand differs widely. The worst offenders of all lists are SimilarWeb and Personas Plus under Windows 7. They slow down the startup time of Firefox by 223% and 202%. Compare that to the 25% or less add-on start-up time on the tested other operating systems. These numbers may be flawed, and it is very likely that they are considering the huge difference between Windows 7 and all other tested operating systems. While a flawed test is the most likely explanation, it could on the other hand be an extension specific problem instead. Only re-tests will tell.