Mozilla: Each Firefox Add-on Adds 10% To Firefox Startup On Average

Add-ons can severely impact the startup time of the Firefox web browser: On average "each add-on you install adds about 10% to Firefox start-up time" notes Mozilla's Justin Scott in a post on the Mozilla Add-Ons Blog.

This means that the startup time of Firefox on average doubles if ten add-ons are installed.

Mozilla has made the decision to improve overall add-on performance, and the blog post lists plans of the Mozilla development team to improve the performance of add-ons in the Internet browser.

Probably the most interesting point on that list is that Mozilla intends to prevent automatic installations of add-ons without the user's permissions.

It is quite common that programs (security software for instance) install toolbars and other browser add-ons without the user's consent. Even worse, these add-ons are often the cause of performance problems and problematic to remove.

In an upcoming version of Firefox, third party add-ons will not be installed unless the user explicitly allows the installation in Firefox

Another improvement for Firefox end users are slow performance warnings that will be added to the Firefox add-on gallery for add-ons that slow down the Firefox start-up time by more than 25%.

Two of the add-ons, Firebug and FoxLingo, slow down the start of the browser by 74%, followed by AniWeather with 54%, Flashgot with 50% and Floxclocks with 46%.

The first add-on that I'm using, Video DownloadHelper is placed 7 with 33%. 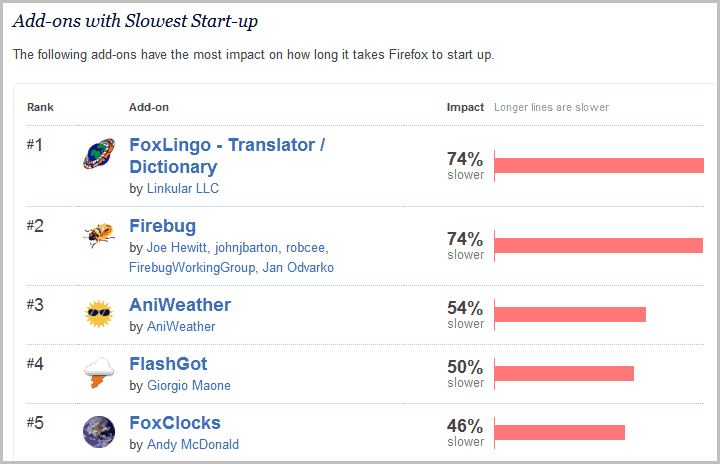 Mozilla asks add-on developers to optimize their add-ons so that they have less than 5% impact on the startup time of the web browser.

Firefox users can disable add-ons that they do not use regularly. Disabled add-ons are not loaded during Firefox startup. My guess is that we will see features similar to those that Microsoft has added to Windows over time, namely on-demand activation of add-ons (possible thanks to the new restartless design) and delayed add-on start-ups.

Still, the best news for the end user is the end of automatic add-on installations without user permission. It is not clear if that will also block plugins from being automatically active in the web browser, lets hope it does.

Article Name
Mozilla: Each Firefox Add-on Adds 10% To Firefox Startup On Average
Description
Mozilla revealed in a recent blog post that each individual add-on adds on average 10% to the startup time of the web browser.
Author
Martin Brinkmann
Advertisement

Previous Post: « How To Work With Multiple Spell Checking Dictionaries In Firefox
Next Post: Replace Bookmarks In Firefox »