The Current State of Firefox, What You Need To Know

Mozilla has changed the development process of Firefox significantly after the release of Firefox 4.

This guide covers all that you need to know to understand that transition, and it will furthermore give you all the information at hand to stay on top of the Firefox development.

I have covered the Mozilla Development Specifics in a previous guide and do not want to rehash all the information that have been posted there. Only that much: Mozilla works on three different versions of the web browser at the same time once they are in full swing (when the Nightly channel reaches Firefox 7)

The development begins with nightly releases of the browser which are moved to the new Aurora channel after six weeks. From there they are developed for another six weeks before they are moved to beta, and then later on to release. Work on a new build begins immediately after a build has been moved up a channel.

That's why you now see Firefox 5 and Firefox 6 in the news. Firefox 5 development started in the nightly channel. That release yesterday has been moved to the Aurora channel while work on Firefox 6 began in the Nightly channel.

In weeks, Firefox 5 will move from Aurora to Beta, Aurora will receive Firefox 6 from Nightly, and Nightly will start work on Firefox 7.

Aurora, Beta and final releases of Firefox can be downloaded from the new Channels page over at Mozilla.

Only the Aurora build and the Firefox 4 final release are currently listed on that page. In weeks, the first beta builds will appear on that page, which is also the time when Aurora moves to Firefox 6.

The different channels can also be visually distinguished from one another. Aurora comes with an Aurora menu instead of Minefield, and the about Aurora page displays in black instead of the standard gray colors. 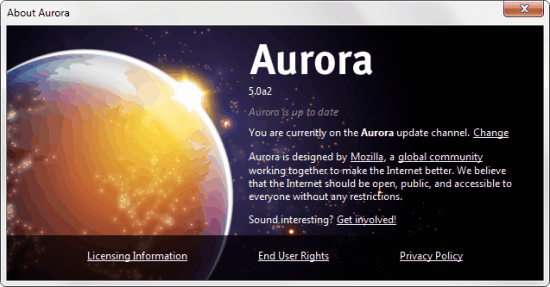 When you first start Nightly, Aurora or Beta builds you will notice that add-on compatibility checks will mark several of your Firefox extensions as incompatible. This stems from the fast increase in browser versions. Lets take a look at the versions for a moment:

Probably the easiest way to force compatibility is to install the Add-On Compatibility Reporter by Mozilla. It supports all versions of Firefox that have been released so far (from 3.5 on)

The extension enables all add-ons that are currently installed, regardless of their actual compatibility with the browser version.

Another option would be to force compatibility in the Firefox about:config configuration. The core benefit of this is that it enables compatibility natively without an add-on.

For that, you need to enter about:config in the Firefox address bar and accept the warning message if this is your first time.

Compatibility is added with the parameter extensions.checkCompatibility.xxxx where xxxx is the current version of the browser, e.g.

You right-click and select New > Boolean from the list. Add the desired parameter and set it to false to disable compatibility.

You can also use extensions.CheckCompatibility.6.0a without a number to enable compatibility for both the Nightly and Aurora builds at the same time.

The problem here is that you need to bump those versions every six weeks when the version is updated.

And there you have it, all there is to know about the new development process of the Firefox browser.