Coincidence? Ghacks reader Paulus reported troubles with his version of Firefox, which basically showed a loading add-on manager screen whenever it was started, with no options to close that screen other than to shut down the whole browser. I suggested starting Firefox in Safe Mode and he discovered that the Firefox add-on Add-on Compatibility Reporter appeared to be the culprit.

Roman, another Ghacks reader send me an email yesterday where he recommended the same add-on. With all the buzz surrounding the add-on I thought I would give it a try. 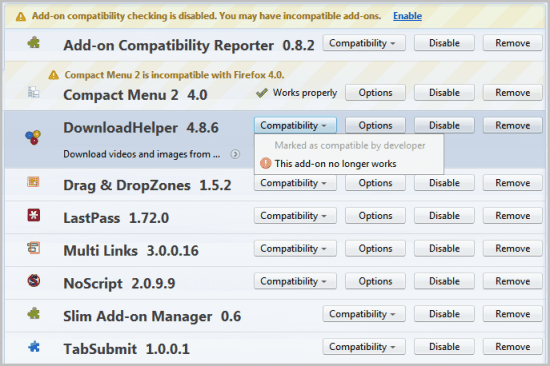 All add-ons are automatically activated, and users who just want to use the add-on for that do not need to make other changes to the system. Users who want to help Mozilla can report add-on compatibilities in the Firefox add-on manager.

The following window opens up if you want to report an add-on as incompatible.

You can add a description of the problems encountered and the list of installed add-ons to help Mozilla identify possible conflicts. It is furthermore possible to disable the add-on in the dialog.

Users who encounter problems after activating the Add-on Compatibility Reporter need to uninstall the extension to revert the changes. It will disable all incompatible add-ons. This is probably what has fixed the issue for Paulus. While the problem may have been caused by the compatibility reporter itself, it is more likely that it has been caused by an incompatible add-on instead. Removing the compatibility reporter would have deactivated that add-on in Firefox so that the issue would no longer occur.

Regardless: Users who just want to make their add-ons compatible with the latest version of Firefox should head over to Three Methods To Force Add-On Compatibility In Firefox to do just that.

Firefox users who want to help Mozilla on the other hand can use the the Add-on Compatibility Reporter to do just that. The Firefox extension is compatible with all versions of Firefox from 3.5 to the latest alpha releases of 4.2.