Is Internet Explorer 9 a modern web browser, and how does it compare to Firefox 4.

These are the two questions that Mozilla's Paul Rouget tries to answer with an infographic and a blog post.

The infographic looks at the technical side of things, web compatibility, platform support and hardware acceleration to name a few.

All show that Firefox 4, and sometimes even Firefox 3.5 or 3.6, do better than Internet Explorer 9.

In his blog post he comes to the conclusion that Internet Explorer 9 is not a modern web browser. The conclusion is that IE9 supports less web standards and less technologies than Firefox 4 and can therefore be considered "More modern, but not really modern". 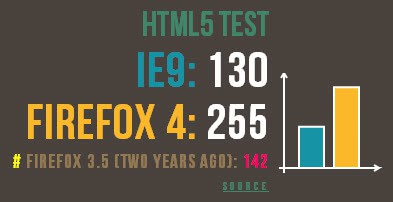 One of the arguments brought forth describes how Firefox 3.5 supported technologies such as video and canvas tags years ago while Microsoft added support for these technologies only recently.

This raises a question from a user perspective. How many websites actually used those tags two years ago? The same questions can be asked for HTML5, CSS3 and JavaScript Api compatibilities.

Are users actually benefiting from the additional 125 points of Firefox 4 in the HTML5 test or is the majority of users never going to visit a website that makes use of those tags? What if Microsoft plans to add support with the first major update of IE9?

The official transition to HTML5 will be in 2014 and while some web developers are already making use of HTML5 technologies the majority of websites do not require the technology yet.

Another interesting aspect of comparisons is to look at the things that are not mentioned or included. No mentioning of the Acid3 test? Probably because the values are to close (IE9 95%, Firefox 4 97%). No mentioning of JavaScript performance? Maybe because Internet Explorer 9 is a tad faster, albeit not much.

I think that Firefox 4 is a great browser and the developers should not feel the need to point at other browsers to show that. Internet Explorer 9 is another great browser, a huge step forward compared to Internet Explorer 8. Office users who are stuck with IE8 will sing out in joy when the system admin updates the browser. It is faster and offers better compatibilities.

What's your take on the infographic and blog post?

Martin Brinkmann is a journalist from Germany who founded Ghacks Technology News Back in 2005. He is passionate about all things tech and knows the Internet and computers like the back of his hand. You can follow Martin on Facebook or Twitter
View all posts by Martin Brinkmann →
Previous Post: « Paste And Go Firefox Extension
Next Post: Firefox 5 Could Look Like This »