Search giant Google has made a surprise move into the travel business with the acquisition ofÂ  flight information firm ITA Software, as reported by the BBC.Â  The firm provides software that organises fares, flights and journey times.Â  These are then used by airlines, travel agents and flight comparison websites.

Google have hinted that they may expand the features of the software to enable users to search directly for flight destinations, and with the company's history of consumer-oriented products, this could well be a possibility.

"What we're going to do is build new flight search tools that focus on end users," said Google chief executive Eric Schmidt.Â  He went on to say though that Google would not be looking to sell airline tickets direct to consumers.

With the travel business so huge this is not an unexpected move for Google.Â  What it gives them is further tools that work within search and data organisation.Â  The logical next step for the company after this would be a similar move into insurance.

Google confirmed it was also working on a project that would enable users to search for hotels, with the results displayed on Google Maps. That could put put it on a collision course with firms like Expedia, Travelocity and Opodo.

Google is set on building a complete eco-system that can reasonably be compared to that of Yahoo! when the Internet was young.Â  Back then, their directories system was a system similar to what Google are currently building.Â  The company clearly believes that consumers want a single portal from which to access everything they need information on in their lives.Â  This would be an extremely interesting swing back.

It remains to be seen at this point exactly what Google's intentions are for this new acquisition. 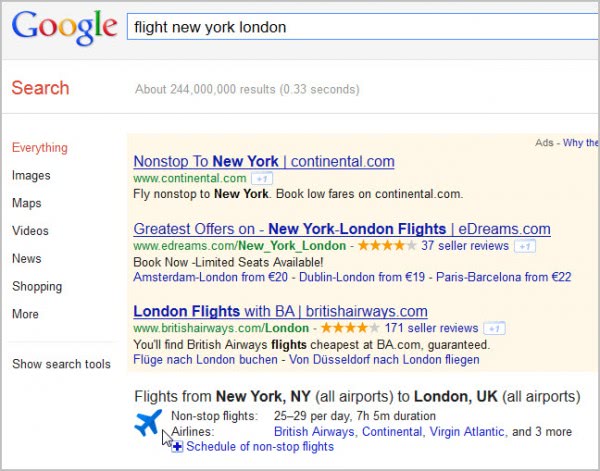 The results lead directly to airlines that fly to the selected destination.