The computer memory usage of the web browser is one of the factors that they use to make their point although studies show that memory usage actually decreased in Firefox 3 when compared to Firefox 2.

Still, the memory usage of the browser can reach hundreds of Megabytes in no time; some users notice that memory use of Firefox may grow quickly, but that it does not nearly decrease as quickly as it rises even if you reverse actions.

Memory Fox is a memory optimizer for the Firefox web browser. It is only offered for the Windows operating system and can be used to constantly flush Firefox's memory usage.

Memory Fox, focuses on two ( 2 ) types of memory usage and with flushing for memory recovery. When resource requirements ( Stack and Heap ) have been reached, according to the user's preset option settings, the memory will be flushed and recovered from Fragmented Orphaned Ram memories.

Memory Fox needs to be activated after installation which can be done in the add-on's options or from the status bar icon. Activating of the memory optimizer results in constant drops in the memory usage of the web browser which can be observed in the Windows task manager. 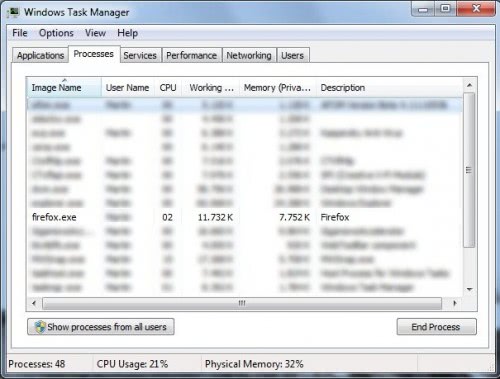 The extension manages to keep the memory usage of Firefox 3 below the 100 Megabyte mark most of the time. This does not result in measurable speed improvements but it might be helpful if the computer system is not equipped with lots of RAM.

Memory Fox can be downloaded from the add-on's Mozilla Firefox profile page.

Update: Memory Fox's author passed away. Others have picked up development. You can download and install Memory Fox Next in Firefox for 32-bit copies of Windows for the same functionality, or Free Memory 2.0 which brings the memory optimization of about:memory to the front. You may run the tool using shortcuts, or by clicking on its icons. It furthermore supports automation on top of all that.