Google is currently giving webmasters and other interested users a sneak peek of their upcoming search algorithm. Interested users can open a sandboxed search engine that is using the new Google search algorithm to test it. Google is mainly offering this new search engine to webmasters to test website rankings but it can also be used by other users as it seems to be faster and with less advertisements in its current stage.

Webmasters who want to compare search engine results can open the old and new Google search engine in two tabs to compare results. A more practicable solution is the use of a tool like Compare Google which displays search results on one page. 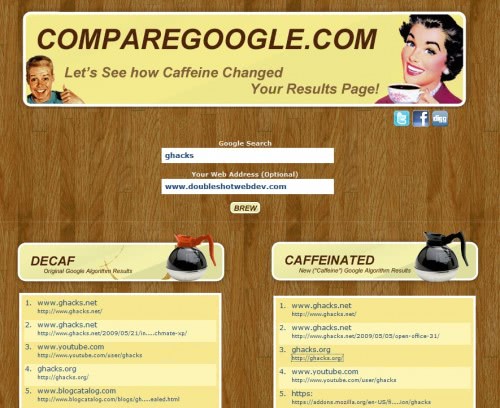 Users can enter a search phrase and an optional domain name on the search page. The tool will then display the old and new Google search results next to each other on the same page which makes it easier to identify ranking changes. Domain matches will be displayed in red so that ranking changes for a specific domain name can be identified on first glance.

Update: The new sandboxed version of Google Search is no longer accessible publicly. While it still may be used by Google employees to test the impact of search algorithm changes on the web, it is not available to webmasters anymore.

Webmasters have no alternative options to test how their websites will fare when Google Search updates its algorithms.