The Traceroute command displays the list of Internet hops that lie between your local computer and the remote computer. It provides an excellent way to identify connection problems because it is actually showing each server the traffic is relayed by on the way to the actual server or service you want to connect to.

Just Traceroute (via Digital Inspiration) takes this a step further by running a traceroute command from multiple locations in the world. Different locations, especially when they are from different parts of the world, use different "paths" to reach their target which could give additional information about the cause of the connection problem.

The services is using servers located in the United States, Netherlands, Australia and Singapore to run the traceroute command. 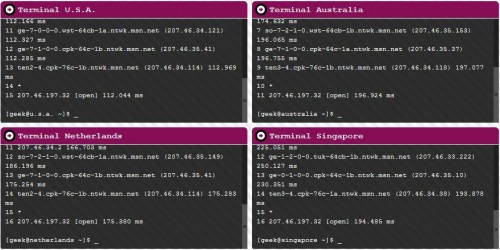 The results can be forwarded to an email address. The very same window offers a way to copy the all four traceroutes to the clipboard directly.

You can enter an IP address or host name on the site and click on the run button afterwards to watch the traceroute commands be run in realtime from all four locations at the same time.

Please note that the server locations seem to have been moved around. I can't say if the service is using multiple servers and switching between them randomly or if the four servers avialable, US, Mexico, Germany and Spain, are always used when trace routes are run.

The service is an excellent option for testing the connection to an IP address or host name on the Internet from various locations in the world. You can use it for instance to verify that the server is not reachable from other locations as well or verify that it is actually reachable and that it is a connection issue on your end.