Load Links with the Keyboard in Firefox

About a month ago I reviewed a Firefox add-on which added numbers to Google's search results so that you could open the search result links simply by pressing the corresponding number on the keyboard.

That add-on was only working with the first ten results in Google and other search engines or websites were not supported by it.

HaH which is an acronym for Hit A Hint is a Firefox add-on that takes that feature to the next level. It adds an identifier to any link on the page which means that you can open any link on that page by typing its identifier and hitting enter afterwards.

But first things first. HaH is not compatible with Firefox 3 currently but I was able to make it compatible by manipulating one parameter in the file. To do so download the install file to your local system, extract it using an archiver, edit the install.rdf file then and change the parameter em:maxVersion to 3.0 or whichever Firefox version you are running. You can use any plain text editor to edit the file.

I was at first a bit puzzled and did not knew how to enable the feature. A quick look on the homepage of the add-on revealed that the feature is enabled by pressing "h".

This automatically adds numbers to all links on the website which you can launch then automatically by typing the number and hitting enter afterwards. 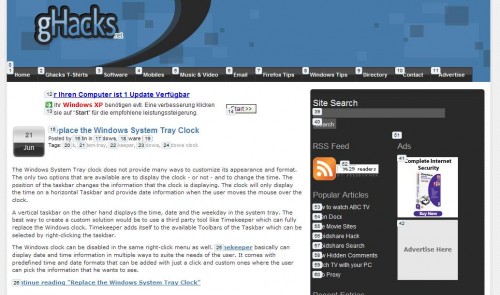 Update: The extension has not been updated for years. An alternative that you may want to try instead is Mouseless Browsing. It is compatible with recent versions of Firefox but development has been suspended as well by its author which means that it may not work in future versions anymore. For now though it works just fine.

Previous Post: « Change the number of results in the Firefox location bar
Next Post: « Visualize blue https sites in Firefox 3 in a better way