I really loved the 8-bit gaming systems. I was pretty much a Sega fan back then and only played some Nintendo games like Super Mario Brothers or Zelda on the Nintendo Entertainment System. I did however follow the news and games and know lots of old classic games that came out for that Nintendo video game system and I actually bought a few already on my Nintendo Wii using the Virtual Console.

Still, it's sometimes nice to just play a quick game and that's where browsers excel. Nintendo 8 is a website that has huge list of available games that can be played in the browser which has to support Java because the games are emulated in a Java applet.

You can choose to browse a category like Action and RPG or browse all available games. Every category except the one that lists all games displays a preview image of the game. A click on the title or screenshot loads the game. Controls are usually the arrow keys for directions, B-key being Z, A-key being X, Start key being enter and Select mapped to CTRL. 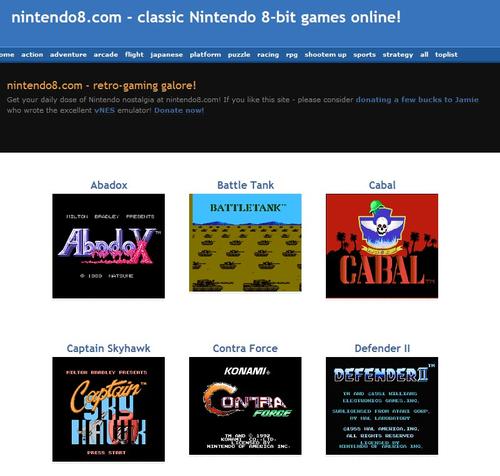 Games are fast loading and performance is fine. Excellent way to spend some free time.

Update: The site is still up and running, and the majority of games are still playable on the site. If you have played SNES games as a child, you probably recognize some of the game titles right away. How about Defender of the Crown, Micro Machines, Castlevania, Contra, Bomberman or Mega Man?