Do you read EULAs thoroughly every time before you accept the End User License Agreement or do you just scroll down to the bottom and click on accept without reading the agreement?

I do not know where I read it, but someone calculated that you would spend more time reading those agreements than anything else in a year.

I do the latter most of the time mostly because I do not have the time to read through it and probably not the knowledge of the terms used in the EULA which would lead to more research on my part before I'd make a proper decision.

If you have a similar reason but would like to know the most important passages in the EULA you can try the EULA Analyzer. The Eula Analyzer analyzes the contents of an EULA and displays and rates the parts that can be associated with certain keywords.

I performed some tests and did scann the Adobe Software License Agreement for instance. The application revealed three main sections that it named advertising, third party and web site addresses.

Depending on the license scanned, more or less parts may be displayed. A scan of the Google Chrome terms of service for example revealed five points of interest. Promotional messages and without notice are the two new ones next to the three ones mentioned above.

Each part contained several phrases taken from the Eula and an interest level, and the possibility to jump straight to the line in the actual agreement to read it in context. 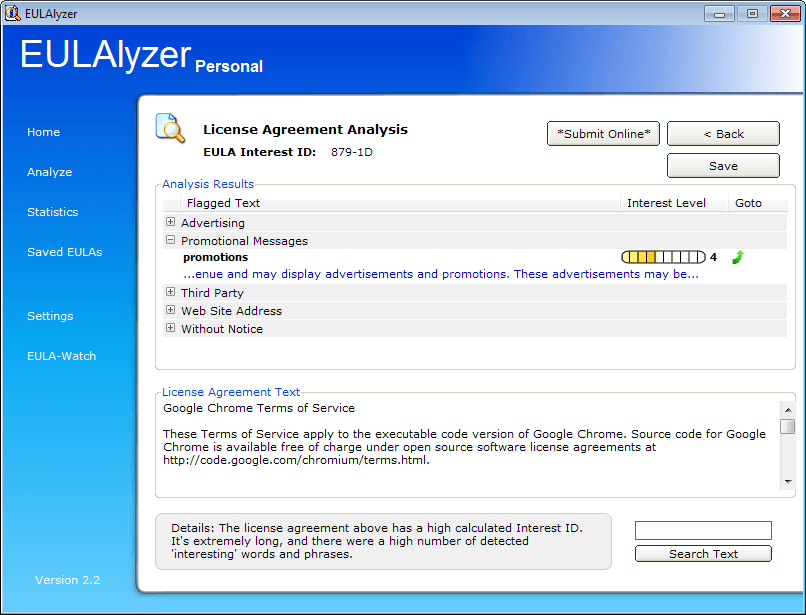 EULAs can either be pasted and copied into the software to analyze them, or captured automatically by dragging and dropping a capture button on the EULA.

The application is free for personal and educational use, and compatible with all recent versions of the windows operating system. A business version is available that introduces two new features and comes with a license that allows the use in business environments.

The two new features are Eula-Watch, an automatic feature that detects most license agreements automatically for you, and automatic update notifications.

The second option works well most of the time. The main problem that you may run into is that the capture button does not work, and that you cannot copy the agreement manually as well.

You can configure the program to automatically save all scanned EULAs on your system.

The program can be helpful. While it will never reach the same level of manually going through the license agreement, it is helpful if you need information about the agreement but do not have the time to go through it line by line.

Martin Brinkmann is a journalist from Germany who founded Ghacks Technology News Back in 2005. He is passionate about all things tech and knows the Internet and computers like the back of his hand. You can follow Martin on Facebook or Twitter
View all posts by Martin Brinkmann →
Previous Post: « Open accidentally closed programs again
Next Post: Join The Windows Feedback Program and grab some free apps »