Revolutionary new web 2.0 app that does absolutely nothing!

I have to say this is the most ingenious app I have ever seen. Download Nada to feel better, while it does nothing for you too! Nada promises to be light on hard drive usage, light on memory, not weigh you down with unnecessary features, a dream come true.

Nada 0.5 is a 1kb download, upgraded from Nada 0.9. According to the developers they will have Nada 0.0 out by the end of the year, not much more to go then! Take a look at just one of the coolest features, compatibility is at the heart of this piece of software ingenuity:

"Can I (not) use NaDa on an old computer? Sure. NaDa is compatible with any hardware you can imagine. For example, NaDa™ does nothing on Ze PowerSuitcase, Ze Cube (Think Clear!) or on the >SE/30-TV."

If you want a more in depth look at this tool, I suggest you take a look at the home of Nada, I strongly recommend reading through the whole page, it's hilarious. 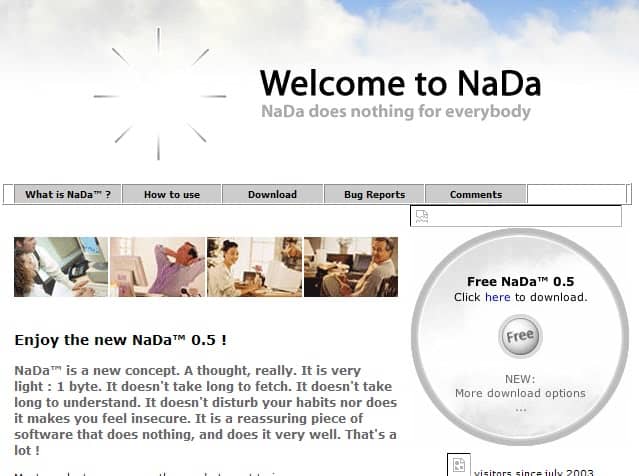 Update: Nada is still available, but does not appear to have been changed since our initial review. The version is still 0.5 and there does not seem to have been any improvements made to the app since 2007.

The app has no requirements, it runs everywhere, even on mobile phones, and you can even put it in the recycle bin if you want, and it works there as well.

It should be clear by now that Nada is a prank, something that may have been designed to make fun of all the Web 2.0 announcements of the past.

Update: Nada is no longer available.

Article Name
Revolutionary new web 2.0 app that does absolutely nothing!
Description
Nada was a prank application released back in 2007 that did not really do anything but was advertised as the next big thing.
Author
Martin Brinkmann
Publisher
Ghacks Technology News
Logo

I'm a 24 year old guy writing blogs, playing music, singing, playing bowling, reading, doing a bit of handcraft, working away on a number of projects, the list just seems to grow and grow, and that's the way I like it :)
View all posts by Daniel Pataki →
Previous Post: « Change the default Wlan Channel to improve wireless connectivity
Next Post: Download Windows Server 2008 Release Candidate »