The beta version of Mango is open to all users but language courses are only provided to English speaking users. Once signed in users can select from eleven different languages including Japanese, German, Mandarine Chinese , Spanish, French and Russian. All courses are divided into several lessons which are made up of sheets each.

The Japanese language course for instance is made up of 101 lessons, the first lesson of the course has 91 sheets which are called slides here. 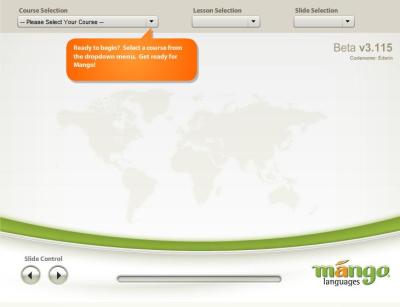 Each slide takes up one sheet which means information are separated to concentrate on the important aspects. I was first a little bit worried because the Japanese course began with a conversation that was only displaying Japanese characters which I could not understand.

Luckily those characters were all explained on later slides of that language lesson. I really liked how this was done. The English meaning first, below the Japanese letters and a Japanese speaker who pronounces the words. Everything can be replaced immediately and if you move the mouse over a Japanese word you get an overlay showing how the word is pronounced.

That help does not use the International Phonetic Alphabet but a simply English word of the Japanese characters. Still really helpful to get it right at the beginning. 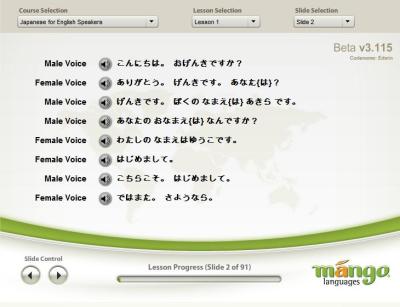 Several slides contain important information about basic language concepts. Others ask the user a question which he has to answer (for himself) in a time given.

For example. The first sentence that you learn is "Hello ! How are you." After showing and pronouncing these words in Japanese and giving the user background information the user is asked what Hello and afterwards what How are you means in Japanese. This is shown after a certain time so that the user exactly knows if he was right or wrong. Speakers seem to be professionals only. I took a look at the German language course as well and it seems that all courses have the same setup. A difference in the German course is that they use colors to show which English word belongs to which German word and explain what it would mean literally.

Mango is in my opinion an excellent online language course which I will be using to learn at least Japanese. Something which I always wanted to do but never had the motivation to do. I hated those book courses with tapes or CDs which were just to uncomfortable to use.