Add Transparency to your windows

Glass 2k is a little freeware application for Windows 2000 and Xp which you can use to add transparency effects to any window on your system. It remembers the changes that you make over sessions so that you do not have to make the modifications again.

The default keyboard shortcut to add transparency is CTRL + SHIFT + a key between 1 and 0 with 1 being transparent and 0 being the default value of all windows.

The keyboard shortcuts can be changed to other keyboard combinations if you prefer that. Alternatively you can opt to add a Transparency Popup to the right mouse button which can be combined with a key as well. 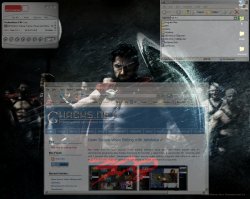 Please note that the program is only compatible with Windows XP and older versions of Windows, and not with newer versions such as Vista, Windows 7 or 8.

It is advised to have a capable video card to avoid slow downs and other issues while running the application. Make sure you have installed the latest video drivers as well.

Update: The program is not under development anymore and while it is working fine under Windows XP and Windows 2000, it is not compatible with newer versions of the Microsoft Windows operating system.

I suggest you check out GhostWin instead, which can also add transparency effects to any open window on your computer. The program is fully compatible with all recent versions of Windows so that you won't run into any compatibility issues using it.