Screensavers are boring. The default screensavers that ship with Windows XP either show a static picture or animated text that quickly becomes boring. Would not it be much nicer to spice up the screensaver and create something fantastic, something that everyone else who would see would want as well?

The Windows XP Video Screensaver is the solution. This freeware lets you play videos - including audio - as a screensaver on your system so that you can use the vast repository of videos available to beautify your desktop when it is idle.

The Video Screensaver offers some parameters that you can modify. You can define the playback size (Fullscreen or 50% - 400%), play a random file, loop the file, mute the audio and alter playback speed (from 0.1 to 3.0). You may use playlists or select a file manually. Most file types are supported, the most common ones are of course avi, mp3 and wmv  - the tool basically supports all file types that the windows media player is able to play. 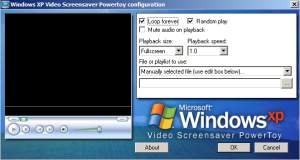 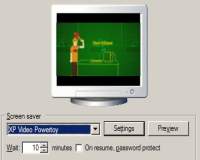 It seems to have some problems playing certain files that have been using a special codec for their audio playback.

Update: Microsoft has retired the Windows Media Plugins website. The page the plugins were hosted on is now linking to various other sites with recommendations, including plug-ins. The big issue here however is that the majority of plugins are no longer listed on the alternative website. The only plugins you find there are third party plugins, of which the majority need to be purchased before they can be downloaded and installed.

Update 2: It too is no longer available. You can however check out the Microsoft Video Screensaver for XP instead which provides you with the same functionality. Yes, it is also created by Microsoft.