Windows Vista Ultimate users have Dreamscene which brings video screensavers to their operating systems. Several hacked versions of Dreamscene have been published that can be installed on other Vista editions as well but not on Windows XP.

Microsoft however released a video screensaver for XP in 2005 which makes me wonder why they limited Dreamscene to Vista Ultimate only. Well, I'm not really pondering about that considering that Ultimate's price demands that it offers features that other versions of Vista do not offer.

The Microsoft Video Screensaver should work on all versions of Windows XP and includes one video from Microsoft. You can choose to use one or more of the videos located on your computer instead. You do this by pointing to a folder in which at least one video of a supported format is stored. 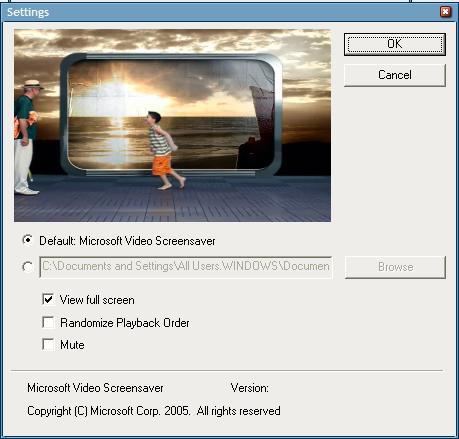 The video screensaver seems to support more than just wmv files. I was able to successfully load avi videos for instance.

If more than one video is found they will be played in sequential order with the option to randomize playback order if you like. It takes a few seconds to load larger video files but small ones play instantly. Microsoft Video Screensaver offers two more options. One is to play the video in full screen mode and the other is to mute the sound.

The download requires a check if the operating system is a genuine one.

The download on the Microsoft website is no longer available. We have uploaded the last released version to our own download server for archiving purposes. Please note that we don't support the program in any way. You can download it with a click on the following link: Microsoft Powertoys

This one seems to ship without the default video from Microsoft and does not check the validation during download. I'm not sure if checks are made during installation as well.

Update: Note that the program is only compatible with Windows XP and no other version of the Microsoft operating system. I personally suggest that you turn off the monitor whenever you keep the computer running but are not actively using it. The video screensaver may however be an interesting option for shops and other business locations where a black screen is not the most appropriate option.