Yup, it's the summer, that time traditionally called the "silly season" here in the UK so far as the news is concerned.Â  Now tech blogger Paul Thurrott has found a lovely little gem of a report from a company called AptiQuant Psychometric Consulting into the "Intelligence Quotient (IQ) and Browser Usage" of the public.

The report is "measuring the effects of cognitive ability on the choice of web browser", yup you read that right it's a test of how intelligent you are compared to what web browser you use.

They found that users of Microsoft's Internet Explorer browser have lower IQs than people who use other browsers.Â  To be honest I'm an IE user myself and I did take all the entrance exams for MENSA (but decided not to join).Â  Also as the author of "Troubleshooting Windows 7 Inside Out" I prefer not at install dupliware on my own computers, I'll leave you to figure yout why. Â However on this occasion I'm actually prepared to believe this study is true... to an extent!

Internet Explorer, being bundled with Windows and coming directly through Windows Update is a browser you don't need to think about getting, if you have updates switched on then eventually it will just happen.Â  I'm also fully prepared to believe that people who are still using IE6 are dumb, though not necessarily that they have low IQs.

The study showed a substantial relationship between an individualâ€™s cognitive ability and their choice of web browser.Â  From the test results, it is a clear indication that individuals on the lower side of the IQ scale tend to resist a change/upgrade of their browsers. This hypothesis can be extended to any software in general, however more research is needed for that, which is a potential future work as an extension to this report.

It's also quite easy to believe that people with higher IQs might be more likely to shop around for a different browser, know where to look and how to download and install it.Â  What strikes me as completely stunning here is that the highest recorded IQs in the 'study' are people who use Opera.Â  This particular browser has been slammed in recent years for being full of security holes.Â  Thus the thought that the people with the highest IQs wouldn't be bothered by this is just ludicrous. 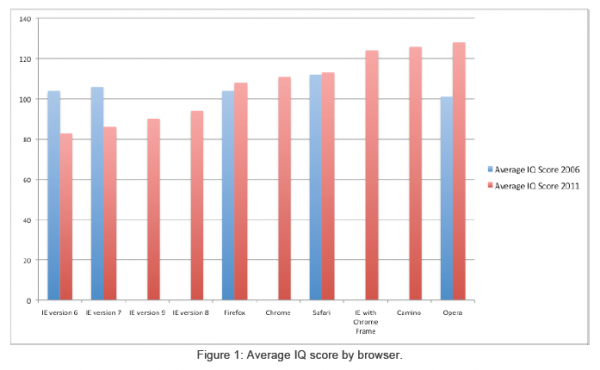 The study was conducted from a sample of just over 100,000 people from the USA, UK, Canada, Australia and New Zealand who went looking for an IQ test.Â  Apparently these people were not aware they were part of this browser study.

People commonly use different browsers at work than they do at home, and different browsers again on smartphones and tablet devices.Â  What the study also completely fails to take into account is that many people use the Internet at work where they have no choice whatsoever on the browser they use.Â  Because this study didn't ask people whether they were at home or at work the results are therefore meaningless.

AptiQuant say "Our data have important implications" which, apart from being terrible English [it's "has"] simply isn't true given what we know about the study.

It's not all good news for IE bashers though.Â  The study also found that the most intelligent people were more likely to switch away from Firefox, Safari and Chrome in favour of Opera and a browser called Camino that most people have never even heard of.

I think it can safely be said that this study is "unscientific".Â  If I were to offer a personal view, I would say that, yes, people with higher IQs are more likely to look for a browser alternative, but that alternative would much more likely be Chrome or IE9.Â  In short, they'd look for a modern, fast, HTML5 compatible and very secure browser.

So there we have it people, the 65% of computer users, still using Internet Explorer are dumb, and if you really are one of the most intelligent people around you'll switch to either the world's least secure web browser or one that nobody's ever heard of.

In all though, this is a bit of fun for us and something that enables us to point and laugh at some of our friends.Â  Job's a good'un.