Google has implemented an initial version of the controversial extension manifest V3 in the latest Chrome Canary (and Chromium) builds. Developer Simeon Vincent announced the inclusion on the Chromium Extensions group on November 1, 2019.

Developers may use it to test their extensions against the upcoming specification that the company hopes to roll out in 2020 to stable versions of the web browser. The version that is implemented in Chrome Canary should be considered "early alpha" according to google. Many features are not set in stone including the changes that affect content blocking or changing extensions.

Extensions will be able to use the manifest V2 as use of manifest V3 is optional at this point in time. Google has not revealed yet when it plans to make the use of V3 mandatory for extensions. 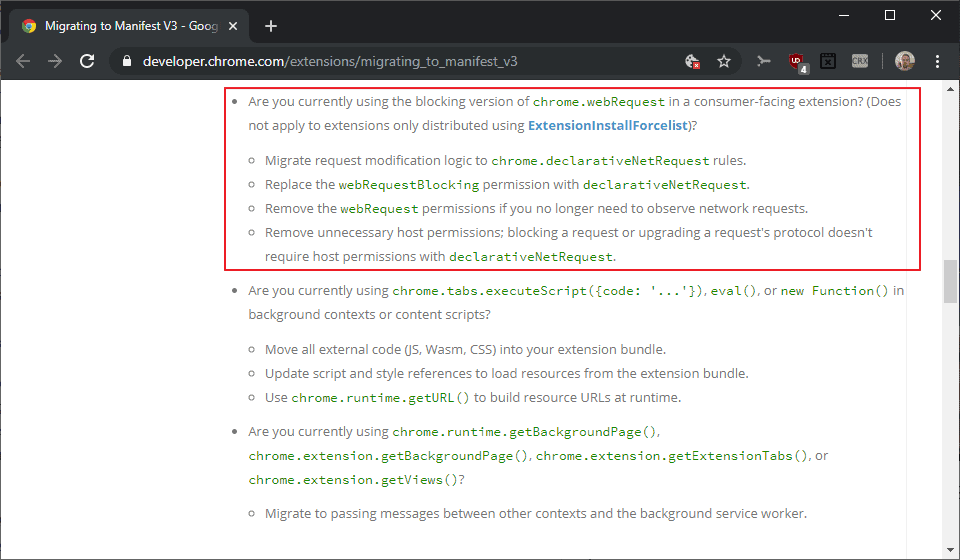 The company published an initial draft of the third major version of the extension manifest for Chrome back in January 2019. Google was criticized heavily for the draft as it changed features that certain extensions relied upon for their functionality.

The most controversial part of the new manifest limited the webRequest API that content blockers used to block trackers and advertisement on the web to monitor connections only. The APIs capabilities to modify requests were removed in the draft and a new API, called declarativeNetRequest, was created by Google as an alternative for extensions that needed to work with connections.

The new API gives the browser control over modifying content whereas the old provided the extensions with the capabilities. More problematic than that was the initial hard limit of 30,000 rules that the API supported.

Popular filter lists, lists that point to tracking or advertising related resources on the Internet, have more than 70,000 rules and if a content blocking extension supports multiple filter lists, could cross the six digit mark easily. Google increased the maximum limit of the API to 150000 in mid 2019; sufficient for running content blockers with default configurations.

Other browser makers spoke out against the API change. Mozilla revealed that it had "no immediate plans to remove" the original API and companies like Brave and Vivaldi revealed that they would not follow Google either. Microsoft did not make a public statement; the company's upcoming new Microsoft Edge browser is based on Chromium and thus affected by the changes that Google implemented unless Microsoft makes custom modifications to the browser.

Only time will reveal if Google will change parameters surrounding the  launch of Manifest V3 before the final version lands in Chrome Stable and potentially other Chromium-based web browsers.

Now You: What do you think will happen going forward in regards to the new Manifest? (via Bleeping Computer)

Previous Post: « How to determine if a Google Chrome extension is safe
Next Post: Use the LeechBlock NG extension for Firefox, Chrome to block distracting websites while you work »