Firefox 63.0.3 is a small bugfix release

Mozilla released an update for Firefox today that brings the version of the web browser to 63.0.3.

Firefox 63.0.3 is a bug fix release that addresses several bugs in the web browser; the new version fixes an issue with Unity-made games, magnet links not working any longer, and several crash fixes among other things.

Stable versions of Firefox should pick up the new version automatically. If that is not the case, run a manual check for updates with a click on Menu > Help > About Firefox. The browser queries Mozilla's update server and should return the new version to you.

Firefox 63.0.3 is available as a direct download on Mozilla's website as well for new or offline installation.

What about Firefox 63.0.2? That version never hit the desktop population; it was an Android-only update for the browser that fixed crashes, freezes in Samsung Galaxy devices, flicking on some sites, and the session history popup. 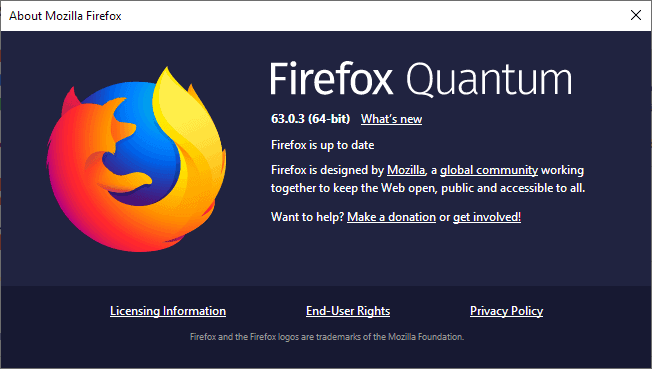 The new version of the web browser addresses several bugs. Firefox users who use it to send magnet link information to torrent clients may have noticed that clicking on these links would not do that anymore in Firefox 63.x. The new version fixes the bug so that the functionality is restored.

While it was possible to copy the link and paste it in the torrent client as a workaround, it was not overly comfortable especially if you had to do it multiple times.

Gamers may have noticed freezes in games that they play on the Web in the browser. The issue affected games made in Unity that used WebGL; Firefox might throw a "a web page is slowing down your browser" notification when that happened on top of that.

Mozilla patched a proxy issue in Firefox that would slow down the loading of pages for users with specific proxy configurations. Mozilla found a bug that prevented Web Proxy Auto-Discovery (WPAD) from working properly in Firefox and corrected it with the release of the new version.

Firefox developers disabled HTTP response throttling in the browser by default in Firefox 63.0.3 as it caused issues with background videos.

Mozilla fixed two crash issues in Firefox 63.0.3 as well.  Only one crash is accessible publicly on Bugzilla. It describes a startup crash caused by a Firefox component.