Firefox add-on developers could upload beta or development versions of their extensions to the same channel the release add-on was offered on. This gave users of the add-on options to test upcoming features and changes, and assist the developer by reporting issues.

Beta versions of extensions were listed under Version History on an add-ons page on Mozilla AMO. Firefox users interested in installing beta versions could click on the link to list available beta versions and install one of them in the browser. 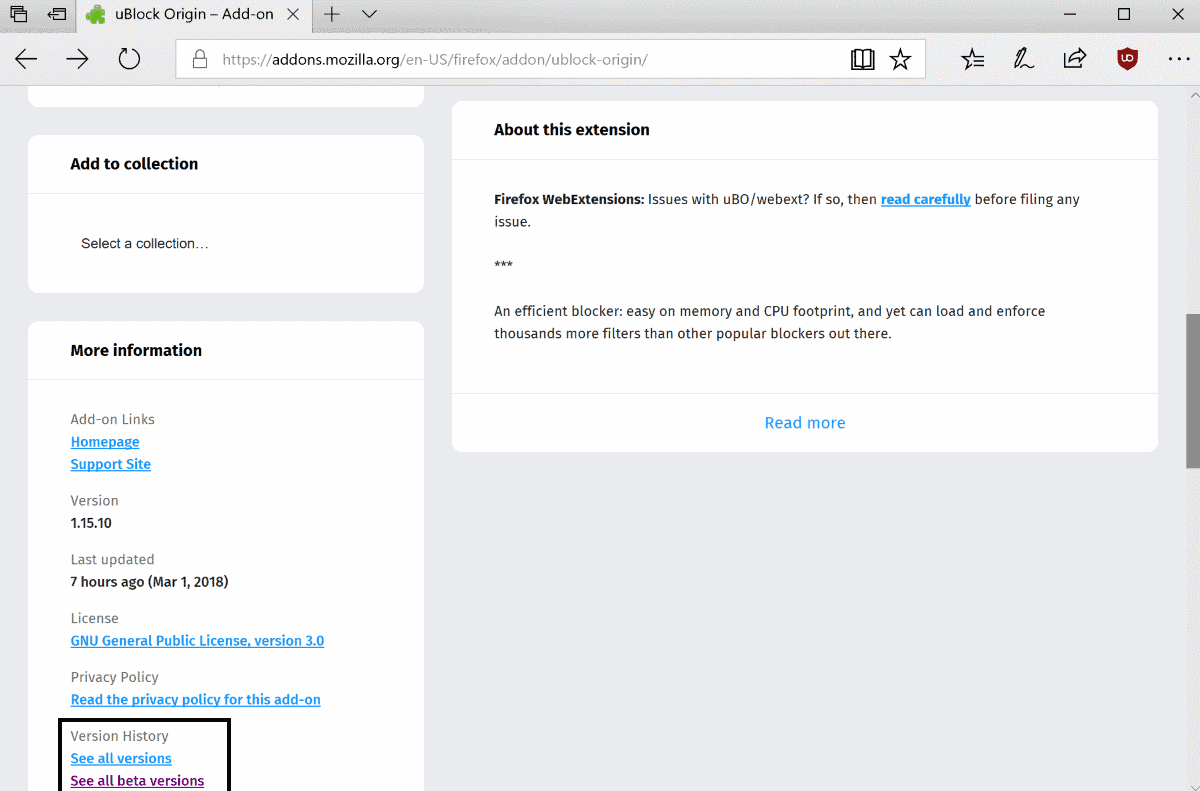 Villalobos notes that the system suffered from problems that affected the user experience and the complexity of the AMO code.

From a user perspective, the main issue was that there was no option to migrate from the beta channel to the release channel through updates. This may not have been a huge problem for regularly maintained beta channels, but it could pose issues for users if a developer abandoned the beta channel.

The developer had to communicate to users that the beta was no longer maintained and that users had to install the stable version of the extension so that they would receive continued updates.

The beta versions feature added complexity to the AMO code, and general use was fairly low according to Villalobos.

Mozilla made the decision based on these reasons to discontinue support for beta versions attached to release versions of extensions. Support ends in March 2018, and developers are asked to self-host beta extensions instead.

While that may mean additional work for developers to get things set up, it enables them to take advantage of features that self-hosted extensions support but Mozilla AMO does not.

One major feature enables them to move users between channels so that it becomes less likely that users get stuck on the beta or development channel of an extension.

While it is too early to judge the impact of Mozilla's decision, add-on developers might consider creating a new add-on on AMO to host the beta version instead. The developer of uBlock Origin did that when the news broke but pulled the add-on again in the meantime and hosts it now on the official GitHub page of the project.

This solution, to separate stable and beta add-ons on AMO, is not advised as it may lead to confusion when users search for extensions and because it makes it impossible to switch users between channels.

The move looks on first glance like another bad decision on Mozilla's part, another feature that gets removed. I think the change is reasonable, however, but that it could have been communicated better. Developers will have to spend time setting the new system up but it gives them more control over the channels.

Mozilla could have communicated the change better, something that the organization still needs to work on in my opinion.

Now You: Do you use beta versions of add-ons?