OneDrive for Desktop gets Pause feature

Microsoft released an update for its OneDrive for Windows desktop client yesterday that introduces a new pause feature for home and business versions of OneDrive.

The OneDrive desktop client offered no options to pause the syncing of files up until now. This meant that you had to terminate the whole program to stop if from syncing data between the local machine and the cloud.

Reasons for wanting to stop the syncing included being connected to a network with a monthly upload or download quota, needing the bandwidth for other activities, or pausing the sync process to block folders from being synced.

While terminating OneDrive worked, it sometimes meant that you forgot to enable syncing again during the session. This could then lead to files not being synced to the cloud.

The upgrade to OneDrive 17.3.6517.0809 changes that. The pause sync feature seems to be rolled out independently of the update, as it is not available for all users yet after the upgrade. 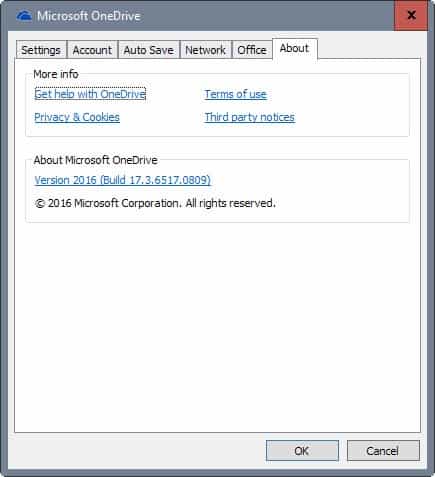 If you have it, you see it when you right-click on the OneDrive desktop client icon in the system tray area.

There you get the option to "pause syncing", and set the pause to 2, 8 or 24 hours. There is no option to pause it indefinitely or set a custom pause period.

The feature seems to be rolled out gradually to all users of the service. I have not seen it yet on several desktop clients that I upgraded OneDrive on, while others report that they may use the feature already.

It is puzzling that OneDrive does not offer a stop button of sorts to block the synchronization completely.

If you look at other sync clients, Google Drive or Dropbox for instance, you will notice that they ship with a pause option that blocks any syncing from taking place while enabled.

A Pause feature is a much needed addition for the OneDrive desktop client as it was a feature that the client sorely lacked up until now.

Now You: Do you use a sync client? Which and why?