Free Upgrade to Windows 10 Final for all Windows Insider users?

Microsoft announced not long ago that Windows 10 would be available as a free upgrade for eligible systems for the first year.

This announcement caused confusion on several levels. First, the wording was vague and some journalists and end users suggested that Microsoft would charge users who upgraded after that one-year period.

While it is likely that Microsoft is preparing Windows to follow Office eventually in becoming a subscription-based service instead of an application that users pay for once and use for as long as they desire, there is no indication that the system will be applied to Windows 10.

Microsoft revealed as well that upgrades would be free even for users without valid licenses. The wording was ambiguous and it was assumed by some that Microsoft would use this to push users to Windows 10 away from currently supported versions of the operating system such as Vista, Windows 7 or Windows 8.x.

It turned out later however that Microsoft left out an important bit in the announcement. The upgrade itself makes no distinction between genuine and non-genuine versions of Windows but the end-result is not the same.

Today, Gabriel Aul, Microsoft General Manager OSG Data and Fundamentals team, revealed that the upgrade from a Windows Insider preview build to RTM will be free as well.

@GabeAul Will you be able to upgrade to the #Win10 RTM version for free with #insiders preview? 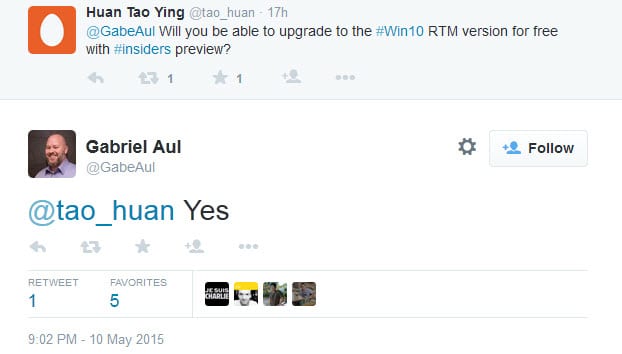 What appears to be a clear answer to a question, is not that clear either. Does it mean that users can upgrade from a preview version to the RTM version for free? Yes, that seems clear. But will that version be genuine after the upgrade or will it be non-genuine?

Several users on Twitter have asked the question but have not received a response yet from Gabriel.

A free upgrade to a genuine copy of Windows 10 would reward Windows Insider users who helped shape the operating system by leaving feedback and reporting bugs.

It would mean however that anyone could get a free genuine copy of Windows 10 by simply installing a preview version of Windows 10 on a computer and upgrading to the RTM release for free.

We will update the article as soon as Gabriel responds to the questions.

Update: Gabriel Aul confirmed that free in this case means allowed to upgrade without issues to Windows 10. For a genuine upgrade, a valid Windows 7 or Windows 8.x license is required.

Now You: Do you think it is likely that Windows Insiders will get the operating system for free?

Martin Brinkmann is a journalist from Germany who founded Ghacks Technology News Back in 2005. He is passionate about all things tech and knows the Internet and computers like the back of his hand. You can follow Martin on Facebook or Twitter
View all posts by Martin Brinkmann →
Previous Post: « Experience classic Windows versions in your browser
Next Post: What is wsappx and why is it causing high cpu load? »