The next Firefox default search engine: Yahoo Search, and others

Google Search has been the default search engine of the browser for the past years with Google paying Mozilla money for that privilege.

While Mozilla put the money from the deal to good use, it made it dependent on that money at the same time.

Ever since the deal was announced (first back in 2004) I had a major concern: that Mozilla became too dependent on Google and that Google would not renew the deal.

Mozilla announced a new strategic partnership with Yahoo Inc. that makes Yahoo Search the default search engine in the United States on mobile and desktop platforms.

We do know that the partnership will span the next five years and that it involves the US market for now with options to expand to other markets in the near future.

That's however not the only big news in this regard. Instead of relying on a single worldwide partner, Mozilla decided to use a flexible system instead which allows for regional partnerships instead of a single global one.

As far as the deal with Yahoo is concerned, Yahoo plans to roll out a new "enhanced search experience" in December 2014 for Firefox users that features a "clean, modern and immersive design" that benefited from input from the Mozilla team.

Firefox users can change the default search engine of the browser easily.  The browser ships with a set of engines, Bing, Yahoo, Google, DuckDuckGo and several others, and offers options to add other search engines as well.

To change it simply click on the down arrow next to the search field and select another engine from the list. 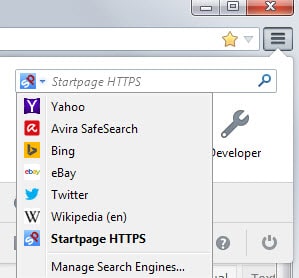 It is not clear yet if the deal will have an effect on existing Firefox installations that use the default search engine of the browser.

Now You: Why do you think Mozilla made the deal with Yahoo?

It seems that Mozilla decided to pick regional partners instead of a single worldwide partner.