Windows users can install two different types of themes. First official themes for the operating system, either in form of themes that Microsoft has created for it or lightweight themes that anyone can create provided they are running Windows 7 or newer versions of Windows.

Update: UxStyle has not been updated in a while, and the last compatible version listed on the project's homepage is still the Windows 10 Technical Preview release. I suggest you use UltraUXThemePatcher instead.

Second full themes that go beyond what lightweight themes can change. Instead of just modifying colors, wallpapers and other basic things, these themes can modify nearly every icon or visual element of the operating system or add new ones to it.

This is blocked in Windows however which means that system files need to be patched first before third-party themes can be installed.

One of the applications that you can use for that purpose is UxStyle. The program, available for all major Windows client and server operating systems is now also available as a preview version for Windows 10.

Windows 10 has been released as a preview version by Microsoft a couple of days ago. While it is just that and not a full release, it highlights the author's intention to create a version of UxStyle for Windows 10 as well. 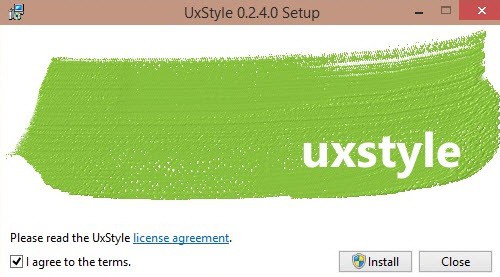 All you have to do is run the application on the PC running Windows 10 and click on the install button to patch the files. UxStyle as always is not modifying any system files but patching them in memory only.

You may receive a UAC prompt after you hit install which you need to accept to complete the process. A log file is displayed in the end which can be useful if you receive an error message such as (Uh oh, something went wrong) to analyze the issue.

Are there any themes available for Windows 10 that benefit from this patching?

A theme called Numix is already available. It has been uploaded to Deviantart and can be installed on Windows 10 system. It won't remain the only theme for long though.

For now it is sufficient to install third-party themes on a PC running Windows 10.

Martin Brinkmann is a journalist from Germany who founded Ghacks Technology News Back in 2005. He is passionate about all things tech and knows the Internet and computers like the back of his hand. You can follow Martin on Facebook or Twitter
View all posts by Martin Brinkmann →
Previous Post: « Display a list of recently opened or saved files in Windows
Next Post: Customize the Windows 10 Start Menu »