Mozilla has released a feedback report that provides us with a broader insight into the minds of Firefox users. Or, more precisely, whether they like or do not like the new interface.

According to the report, more than 80% of Firefox users who commented on the interface are unhappy with it. This leaves less than 20% who like it, and while the sample size of nearly 190 feedback items is not large enough to come to a definitive verdict on that, it highlights the controversy surrounding the redesign.

It is clear that users who have a gripe with something are more likely to express their opinion about it than users who like the change. This plays certainly a role here as well.

Mozilla listed a couple of insights in the data that it collected after the launch. According to that, most users who responded in a negative fashion complained about the inability to customize the Firefox web browser like browser.

Mentioned in particular were the missing small icon mode, the forcing of tabs on top and the removal of the add-on bar.

Other users complaint about Firefox becoming too much like other browsers, which Mozilla classified as "generic anti-change", which was the second largest group followed by others, users who disliked the look of the new interface, and users who had their workflow interrupted by the changes. 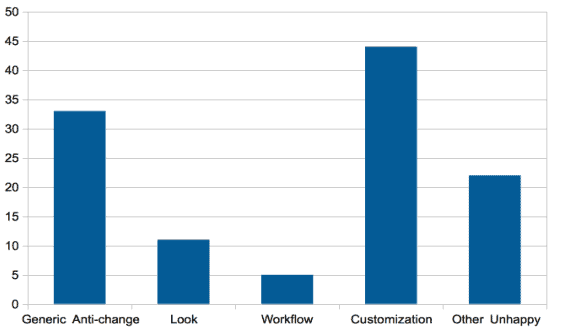 It is interesting to note that the Classic Theme Restorer extension for Firefox is mentioned explicitly in the report, and a suggestion was made to promote it actively to users who prefer the old interface over the new one.

The extension, despite not being listed when you search for it, has received 29 positive reviews ever since it was released by its author Aris. Considering that it can only be installed in Firefox Nightly, and only be discovered through links, it is fair to say that this is an impressive start for the browser extension.

80% is a large amount, even if you take into account that it is more likely that users who feel about something in a negative way will provide feedback about it. The overall number of feedback items that Mozilla has received is rather low on the other hand, which some may interpret as the majority of users being indifferent to the change, or not opposed to it.

It is not clear where the journey will go at this point. Mozilla is collecting feedback, and considering that it did not receive a lot, it makes sense to voice your opinion now as it will count more than later when thousands or users will do the same thing.

Martin Brinkmann is a journalist from Germany who founded Ghacks Technology News Back in 2005. He is passionate about all things tech and knows the Internet and computers like the back of his hand. You can follow Martin on Facebook or Twitter
View all posts by Martin Brinkmann →
Previous Post: « Display detailed information about the strength of SSL connections in Firefox
Next Post: How to import extensions after a Firefox Reset (from Old Firefox Data folder) »