Microsoft: please do something against Media Player spam in Windows Store

Windows MediaPlayer 11 for $4.99? VLC* Player for $8.99? Media Player Classic Black Edition for $4.99? Those are just three examples of Windows 8 apps that try to take advantage of the popularity of popular media players even though they have nothing in common with them. When you open Windows Store right now and browse the top 100 new releases, a selection of releases that meet certain criteria, you will find ten media players listed there.

A search for media player returns 486 hits currently. Not all of them are spam or use deceptive names to lure users into making a purchase. But the list does contain a large number of players that I'd categorize this way. There is VLC3 Player, VMG Player, VLX Player, IVC Player and my personal favorite VIC which not only resemble VLC Media Player name-wise, but do use a similar icon as well. 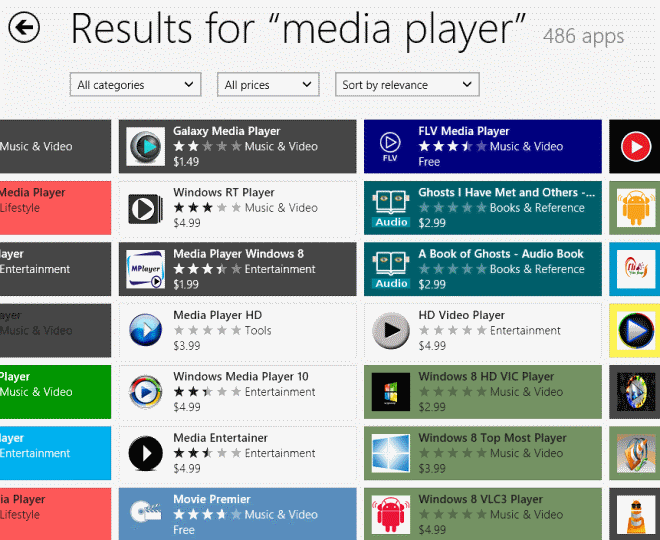 One would think that Microsoft would at least prevent Windows Media Player apps from being listed in store, especially when they are offered for money and violating the company's trademark.

Further investigation reveals that many publishers have released multiple media player apps to the store that are not really that different from each other. The main difference it seems is the name and sometimes the layout, while the functionality does not seem to change that often after all. This is likely done to release a fresh app that may find its way once again into the top 100 new apps listing in store that is prominently displayed there.

Besides issues with trademark violations and names that many would call deceptive, it is also not clear how that many players manage to land in the top new 100 apps listing in store.

While it is certainly possible that those players are popular because - at least some - users believe them to be official products from companies they trust, it can also be that they are artificially pushed to the front. That's however something that only Microsoft can analyze and prevent if this is indeed the case.

Previous Post: « What you need to know about the Windows 8.1 Preview
Next Post: The Top 5 Windows 8.1 features I'm looking forward to »