How to block Chrome from running in the background - gHacks Tech News
ghacks.net

How to block Chrome from running in the background

For the past week or so I have been noticing that various versions of Google Chrome started to add icons to the Windows system tray. I first noticed it in Google Chrome Canary, and since yesterday in Chrome Beta as well. The icons and the browser's behavior is not the same right now, which is certainly puzzling.

Note that Google is displaying those notifications for quite some time now in various editions of the browser, but that you do not really see the icon until you enable at least one application to show them in the browser. The Canary notification on the other hand is a new thing.

The easiest way to disable that is to uncheck the "Let Google Chrome run in the background" setting in the context menu. This terminates the browser immediately and changes the preferences so that it won't be minimized to the system tray anymore when you close it. 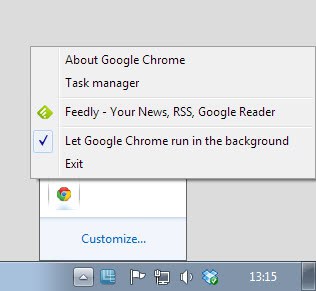 This takes care of this version of the browser. The latest Canary and Dev versions of the browser on the other hand ship with a different icon that does not go away if you uncheck the background app setting in the browser. A left-click on the icon displays the following screen.

You can click on settings here, but it only opens a list of applications that you will receive notifications for. A right-click on the other hand displays options to enable quiet mode for some time. 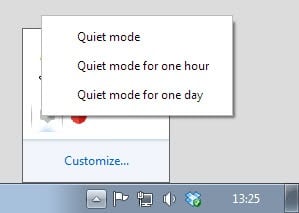 While it is possible to hide the icon if you are running Windows 7 or newer versions of Windows, it is not really the solution to the problem. It is possible that Google will add an option to turn off the notification icon when the feature matures a bit and moves on to other channels of the browser. For now though it does not seem possible to remove the icon from your system when Chrome is running.

The service that is listed by the notification settings is Gmail. One idea that I had was to go to Gmail to turn off notifications there. The problem here was that I received the following notification (in Chrome Canary):

Note: This browser does not support desktop notifications. To enable notifications, upgrade your browser to Google Chrome.

It is possible that this is a bug right now and that disabling notifications here will indeed turn off the icon in the system tray. I can't verify that either way though.

Google in my opinion should add an easy option for users to disable the system tray icon in all versions of the browser just like it has done in Chrome Beta and probably also the stable channel.