WordPress: protect your blog against spam without taxing plugins

I have tested many WordPress antispam plugins here on Ghacks, from Akismet which is more or less the standard plugin for many sites to plugins such as AntiSpam Bee and a couple of others that I can't even remember the names of. I have two issues with these kind of plugins. Checks are usually made on remote servers and, what I consider more important, they sometimes flag legitimate comments as spam. I have a couple of readers from Russia who often get their comments flagged even though there is no reason for that at all.

Since there is no whitelisting by IP or username, it is not possible to get past that issue using those plugins. You can install another plugin that adds whitelisting, but that is yet another thing that is then running on the server.

I decided that I had enough and started to go through the WordPress comment plugin listing to see if I can find a plugin that is offering a simpler solution. After some testing, I found NoSpamNX. It is probably best to let the author explain what it does first:

NoSpamNX automaticly adds additional formfields to your comment form, invisible to human users. If a spambot fills these fields blindly (which most of all spambots do), the comment will not be saved.

I have read tips and seen plugins before that modify the comment form, add captchas or Javascript to the page to fight off spam. The solutions, as solid as they may be, make it either more complicated for human visitors to submit comments, or add code to the site which slows it down on the user site.

The plugin has been up for over a week, and while it does a very good job at preventing legitimate comments from landing in spam - with the exception of one comment in that time that did land there - it did not stop some spam comments from being published here on the site. I have moderated those comments manually up until now, but it meant that they would appear on the site for up to 10 hours.

I quickly found a way to deal with the issue as well. The "Comment author must have a previously approved comment" setting under Settings > Discussion automatically holds comments by new visitors, bots or real, in moderation while comments by users who have posted at least one are not. 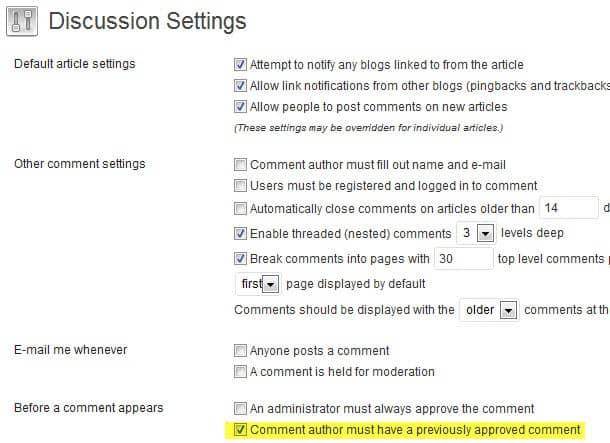 Since spam bots do not leave regular comments it is fair to say that I have eliminated the problem once and for all. While it is certainly possible that some spammers will leave a legit comment first to pave the way for spam comments, I still have options to moderate the comments manually once I find them.

If you are a WordPress webmaster who is plagued by spam or legit comments being marked as spam, I suggest you give it a try.

Martin Brinkmann is a journalist from Germany who founded Ghacks Technology News Back in 2005. He is passionate about all things tech and knows the Internet and computers like the back of his hand. You can follow Martin on Facebook or Twitter
View all posts by Martin Brinkmann →
Previous Post: « Ways to find websites that are copying your content
Next Post: Backup WordPress to Dropbox »