The open source software XAMPP provides webmasters with an easy way of installing an Apache web server on a computer system. The distribution is available for Windows, Linux, Mac and Solaris systems, and contains MySQL, PHP and Perl, as well as popular modules and applications that depend on the operating system the distribution is installed on.

Webmasters and web developers can use the local installation for web development purposes. It is for instance possible to backup an existing web project to restore it in the local XAMPP environment. Webmasters can then test script updates locally before they update the scripts in the productive environment. Web developers on the other hand can use it to develop applications locally, provided that they are working with PHP, Perl or MySQL. 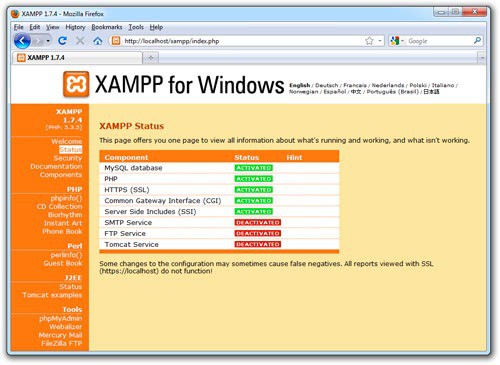 The people behind XAMPP have reeleased a new version of XAMPP for Windows and Linux. As far as the Mac OS X version is concerned, it is the next thing that the developers plan to focus on. If you have followed the progress of the project closely, you may have noticed that the Mac XAMPP version is lagging behind a few versions just as the Solaris version is.

The new version of XAMPP includes the following software updates:

Interested Windows and Linux users can download the XAMPP 1.8.0 distribution from the official website. I suggest you check out the excellent document on the site if you are a new user to make sure everything is correctly installed and configured.

Webmasters and web developers here? Are you using a distribution like XAMPP for local web development purposes?