Back at the end of February 2012, Opera Software released Opera Mini 7 for Apple's iOS operating system, and about a month later for Google's Android operating system. Only owners of basic phones had to work with Opera Mini 6.5 for some time while Android and iOS owners were able to benefit from the new version of the web browser.

Today, Opera Software has made available Opera Mini 7 for all supported basic phones. The new version is now available for BlackBerry devices, devices running Symbian S60, and devices that support Java. To celebrate the release, a video has been created.

Probably the biggest feature addition in Opera Mini 7 is the new smart page feature that displays a one-page summary of social networking activities on Facebook and Twitter. Instead of having to navigate to the sites manually, it is now possible to view a summary of the most important events, messages received for instance, on the summary page directly. 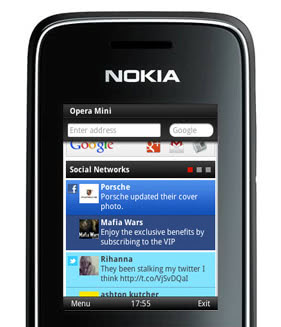 But Smart Page does more than summarize social activities on supported social networking sites. It also acts as a news reader that you can configure to display news that are of interest to you.

Using the Smart Page in Opera Mini 7, you’ll not only be kept up to date on the latest happenings in your social life, but other news, as well. The Smart Page includes suggestions for news sites to follow, as well as the possibility for you to add the feeds of sites you browse most often.

The latest version of Opera Mini 7 for all supported phones can be downloaded directly from Opera's mobile download site. (via Caschy)