When you look at modern computer games, you will notice that many of them make use of achievement systems to keep players interested in the game. Achievements are awarded for in-game action, from silly things like making your first step to defeating 1000 enemies or beating one of the level bosses in the game. Not every gamer is paying attention to those achievements, but those who do stay motivated and some even try to get all achievements available in a game before they lose interest in it.

Cheevos takes that concept to the Firefox web browser. The basic idea of the add-on is to award achievements to Firefox users when they use browser features. This is most of the time linked to a simple task, like opening the add-ons manager, setting a new homepage or clearing the download history.

The add-on displays new achievements in an overlay window on the screen for a few seconds before they are removed again from the browser window. It adds an icon to the Firefox navigational toolbar that is displaying the user's overall points. A click on the icon opens an overview page where all achievements can be looked at. 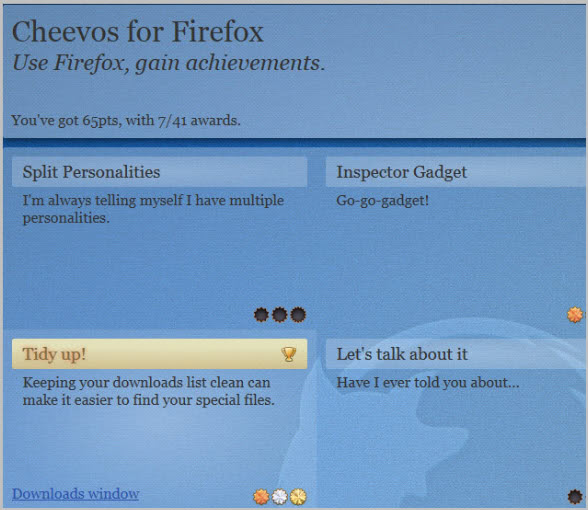 Here you see all achievement names and a short description that is often cryptic and not easy to understand. This is my main point of criticism, as it is often not clear what you have to do to earn the achievement. And while some users may see this as part of the game, I personally would prefer that the support page links are automatically displayed for all achievements, and not only those that are completed by the user.

As a consequence, some users may just click wildly around in the browser until they get all achievements without learning a single thing in the process. Advanced users furthermore will know most, if not all, of the activities that earn achievements.

Firefox users who want to add some fun to their daily browsing sessions can install Cheevos for that. (thanks to Ken Saunders for the tip).